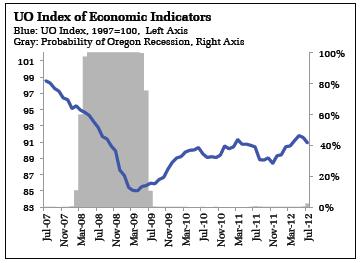 Economic indicators slipped in July, but some special factors were at play. Highlights of the report include:

How will economic issues shape the Presidential election?¬†¬†And what will the election mean for the economy in 2013 and beyond?¬†¬†With these questions in mind, we are pleased to announce the keynote speaker for this year‚Äôs Oregon Economic Forum will be noted economic policy expert and author Bruce Bartlett.¬†¬†In addition, University of Oregon economists Bruce McGough and Nicolas Sly will join us to give their insights on current economic events. Forum Director Tim Duy will provide his annual economic review and preview for 2013. ¬†And, returning for a repeat performance, Brad DeLong, UC Berkeley Professor of Economics is now added to this year’s Oregon Economic Forum!

Bruce Bartlett is a columnist for¬†The Fiscal Times, an online newspaper covering public and personal finance, and¬†Tax Notes, a weekly magazine for tax practitioners and policymakers. He also contributes a weekly post to the¬†Economix blog¬†at the¬†New York Times, and writes regularly for the¬†Financial Times. Bartlett was previously a columnist for¬†Forbes¬†magazine and Creators Syndicate. His writing often focuses on the intersection between politics and economics and attempts to inform politicians about economics, and economists about the current nature of politics.

Bartlett‚Äôs work is informed by many years in government, including service on the staffs of Congressmen Ron Paul and Jack Kemp and Senator Roger Jepsen, as executive director of the Joint Economic Committee of Congress, senior policy analyst in the Reagan White House, and deputy assistant secretary for economic policy at the Treasury Department during the George H.W. Bush administration. Bruce is the author of seven books including the¬†New York Times¬†best-seller,¬†Impostor: How George W. Bush Bankrupted America and Betrayed the Reagan Legacy¬†(Doubleday, 2006).

We look forward to seeing you at this exciting event.