Another monthly employment report was released this morning by the Oregon Employment Department. In July 2012, the unemployment rate increased to 8.7% from 8.5% and the state gained 1,800 jobs on a seasonally adjusted basis. As noted previously our office has been focusing on other labor market indicators in addition to the monthly employment series. Given that 1,700 of the 1,800 jobs in July were public sector, I thought now would be a good time to update employment trends in the public sector. Examining just the total public sector employment masks the trends underlying the data. 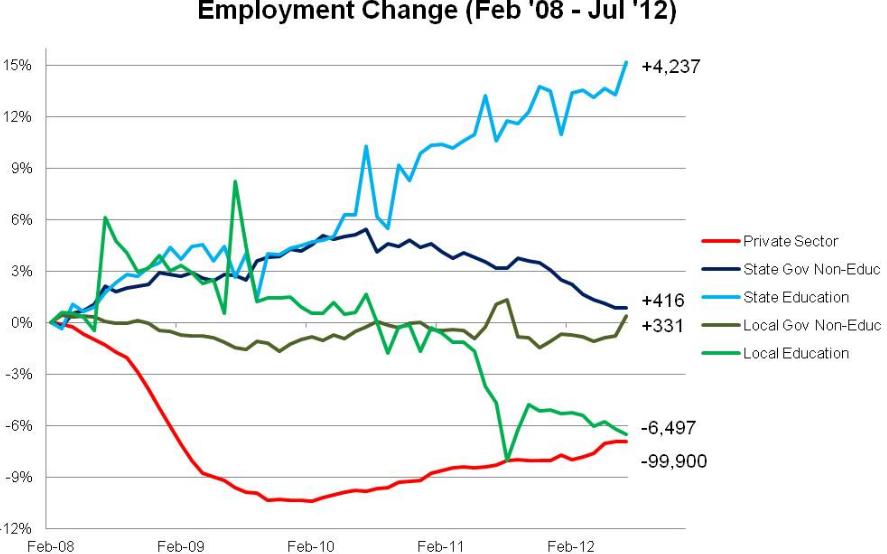 The increase in state education is relatively straightforward as discussed last summer: more demand for higher education due to a lousy economy, more students enrolling, more tuition dollars, more hiring. Local education (K-12 and community colleges) is where the vast majority of job losses in the public sector have been and, unfortunately, our office’s forecast calls for another reduction this coming fall as the school year begins seeing as budgets remain tight. Local government’s non-education sector has held steady the past 4+ years with no real movements up or down. State government’s non-education sector expanded through the first couple of years of the recession as additional staff were hired to help meet the increased demand for services (and given how government’s budget, the recession’s impact is not fully felt immediately) however since mid-2010 state non-education employment has declined and is effectively back where it was at the start of the recession.

Overall, clearly only a gain of 100 in the private sector is disconcerting however based on preliminary estimates, employment revisions will up significantly through March. Unfortunately we do not know what the revisions will look like in the more recent months, however the slow growth trend is likely.