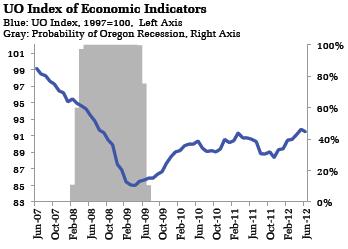 Oregon economic indicators softened in June. Highlights of the report include:

• The Oregon Measure of Economic Activity slipped to -0.45 from an upwardly revised 0.27 in May (“zero” for this measure indicates the average growth rate over the 1990-present period). The less volatile moving-average measure declined slightly to -0.08. Focusing on the three-month moving average, which has been holding near zero for the past two months, suggests Oregon is growing at its average growth rate of the last two decades.
• Only the manufacturing sector contributed positively to the measure in June. The housing permits, unemployment rate, civilian labor force, consumer sentiment, and other services employment components were notable drags on the measure.
• The University of Oregon Index of Economic Indicators™ slipped 0.3% in June for its first decline since November 2011. Of the seven components in the UO Index, six were flat to modestly weaker.
• Nondefense, nonaircraft capital orders slipped, partially offsetting the previous month’s gain. Note that recent data on manufacturing indicates the sector is under pressure from weak growth abroad. The interest rate spread narrowed sharply again as market participants continued to anticipate that the evolving global slowdown would weigh on US growth.
• Both measures suggest continued growth in Oregon, albeit at a rate below what would normally be associated with expansion. Growth should continue to be supported by the national economy, but here again activity remains muted relative to that necessary to rapidly reduce the unemployment rate.
• It remains important to monitor risks to the forecast. Notably, the global economy is under pressure from slowing activity in China and the impacts of the ongoing European economic crisis. Closer to home, there remains considerable uncertainty about the path of fiscal policy in 2013. In short, while slow but steady growth remains the baseline scenario, there appear to be more downside than upside risks at the moment.