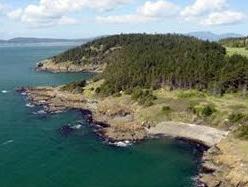 The island has been on the market for two years, and there is no sign of a buyer yet. The price has already come down: when Allen listed the property in 2005, he wanted $25m for it.

But despite his attempt to get rid of the island, Allen has no intention of selling the Portland Trail Blazers. He has not gotten any offers to buy the team, he says, and has not tried to find any buyers. Allan Island (which is named for a Navy hero, not its billionaire owner), however, is far from unique. Craig and Susan McCaw are trying to sell James Island in British Columbia for $75m.