We got into an impromptu discussion in class yesterday about gas prices – I think they are starting to hit undergrads wallets very hard. There was a lot of questioning of whether some market manipulation is going on since the NW is seeing particularly high prices. I did my best to explain the economics of retail gas, but here is The New York Times on the isolated little market that is the Pacific NW:

A spokesman for AAA Washington, Dave Overstreet, said that spring can often be the cruelest season for gasoline on the West Coast, which is largely cut off from the pipeline and refining system that spiders up from the Gulf of Mexico. The Cascade Range here in the Pacific Northwest and the Sierra Nevada in California mark a kind of boundary from the rest of the nation, he said, in gasoline economics.

Refineries in California also routinely reduce production in the spring, preparing for the summer fuel blends mandated by California regulators. And supplies in Washington and Oregon have been further crimped by the shutdown of Washington’s biggest refinery — Cherry Point, owned by the oil giant BP — after a fire in February. A spokesman for BP said on Tuesday that the plant was restarting, but would take some time to resume full production.

In any event, demand also usually goes up in late May, Memorial Day being the unofficial launching pad of the vacation driving season, putting supply and demand back in collision.

“Once they get up and running again, even with the demand being higher, I think that we’ll certainly see things stabilize,” Mr. Overstreet said. How long before prices actually go back down? “Anybody’s guess,” he said.

So now you know…

Update: A reader sends along a few telling graphs from the US DOE showing the dramatic drop in gas supply due to maintenance issues and the resulting excess of crude supply – so once these refineries are back to full capacity, prices should stabilize. And remember folks, this stuff is heavy and transportation costs are high, so local supply is key. 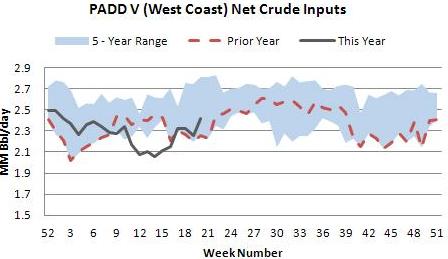 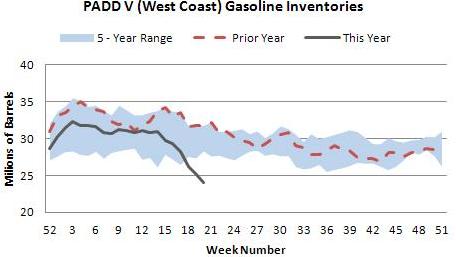 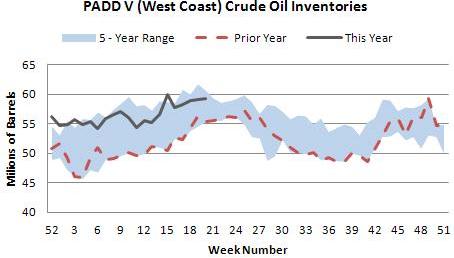