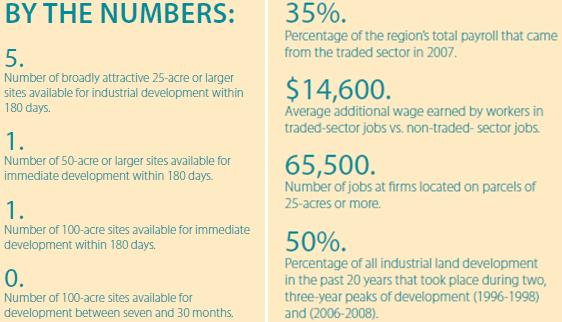 Why does this matter? Because according to the new study conducted by the Portland Business Alliance, the Port of Portland, and Business Oregon, currently over 65, 000 jobs in the Portland region are the result of 60 business operations on industrial land of 25 acres or more. What’s more, these jobs pay an annual average income of $14,600 more than the average non-traded sector job.

The study went on to identify another 11 sites that were not yet ready for development. These sites had multiple challenges including ownership aggregation, infrastructure issues such as water, sewer and transportation services, and brownfields, wetland and floodplain issues.

How much would those jobs and payroll mean to our state’s economy right now?

When the next boom comes, if we don’t address our land supply issue, we won’t be ready. Oregon will miss out on the high-paying manufacturing jobs that are available if we just had the land to accommodate them.

Having companies that want to come to Oregon, but not having the available land, would be an entirely avoidable self-inflicted economic wound to our state.

We expect that there will be an increased focus on the availability of land for economic development in the coming year as the business community begs for action and the 2013 legislature is only six months away.