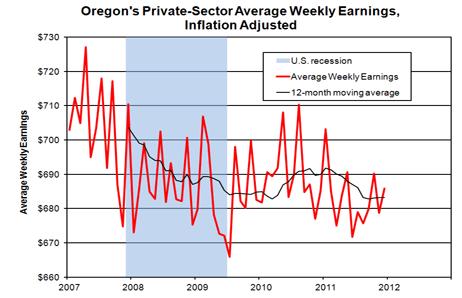 In February, when I last wrote about earnings trends, I noted the steadily rising weekly wages of Oregon workers over the past few years. In reply, an astute reader suggested I take inflation into account, and then see what the chart looks like. This was a solid point, because the trend looks much different after taking inflation into account.

Between 2007 and 2011, inflation (as measured by the Consumer Price Index for All Urban Consumers for the Portland-Salem area) rose by a total of about 8 percent. So, a worker would need to earn 8 percent more in 2011 than in 2007 just to keep up with the rising costs of goods and services.

The jagged line shows weekly earnings in constant 2007 dollars. The smoother line is a 12-month moving average of the same data. Both lines show a situation in which average wages, after adjusting for inflation, were close to $690 per week throughout most of 2008 through early 2012. During 2007, these wages were about $10 to $15 higher per week.

Many factors come into play when analyzing the reasons behind the trends, such as changes in the duration of the workweek, shifts in industry employment, and other changes in the composition of the workforce. Then there’s the debate about which measure of inflation to use. Despite these nuances, it seems clear that real wages of typical Oregon workers haven’t advanced in recent years.