By measuring R&D spending, the number of scientists and engineers, and the amount of patents, trademarks, and copyrights produced, the study, IP Creates Jobs for America, found that “intellectual property’s economic contributions are evident across all states, large and small,” said GIPC executive vice president, Mark Elliot.

In total, the study found that IP-intensive industries power 55.7 million direct and indirect jobs, over $5 trillion in national GDP, and 74 % of total exports.

Diving into individual state data, you’ll find nuggets like the fact that in my home state, Wisconsin, IP supports 1.49 million jobs. It’s a little less in Virginia, my current state of residence, where IP supports 1.36 million jobs. And that’s with Virginia having two million more people.

Go to IPcreatesjobs.com, poke around the map, checkout the fact sheets for your state, and you’ll see how important a role IP plays in a state’s economy and the need to adequately protect IP rights. 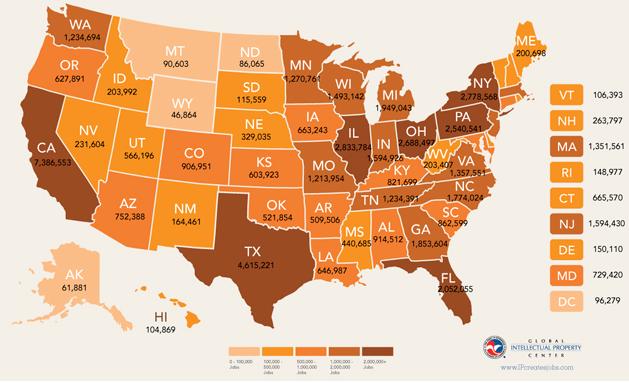