Each year the Oregon Employment Department conducts a Job Vacancy Survey to get a complete picture of what employers are seeking to add to their current workforce. The survey asks about occupations; wages; full-time, seasonal, or temporary status; as well as education and training requirements. The most recent survey, conducted in fall 2011, indicated that there were approximately 30,400 job vacancies in Oregon during the month of October. During the same month there were 176,400 unemployed Oregonians, or roughly 5.8 unemployed people for each vacancy. In the fall of 2010 there were 6.5 unemployed per vacancy. Nationally, there are roughly 4.2 unemployed per vacancy.

There were more vacancies for office and administrative support occupations (4,010) and sales and related occupations (3,967) than any other occupation group (Table 1). In contrast, vacancies in protective service occupations (329) and life, physical, and social sciences (105) were the sparsest during the month. Three specific occupations had more than 1,000 vacancies each: retail salesperson, heavy and tractor-trailer truck drivers, and customer service representatives.

Oregon’s job vacancies offered an average wage of $16.58 per hour, although average wages varied drastically by occupation, education requirement, and licensure requirement. Vacancies that did not require education beyond high school offered an average hourly wage below $15 per hour, compared with average hourly wages of $20.04 per hour for vacancies requiring an associate or vocational degree, $28.05 per hour for a bachelor’s degree, and $34.54 for a graduate degree (Graph 1). A strong correlation exists between more education and higher wages. However, nearly 60 percent of all Oregon vacancies in October did not require any education beyond high school and as a result more than half of all vacancies offered a starting wage below $15 per hour.

The Oregon Job Vacancy Survey has been conducted each fall since 2008. The estimated number of job vacancies statewide in the fall of 2011 was essentially unchanged from the estimated count of vacancies in the fall of 2010. Due to differences in survey methods, the total statewide estimate of vacancies is the only figure that can be compared to previous survey periods; information about vacancies by occupation, average wage rates, educational requirements, etc., can’t be compared with prior years. 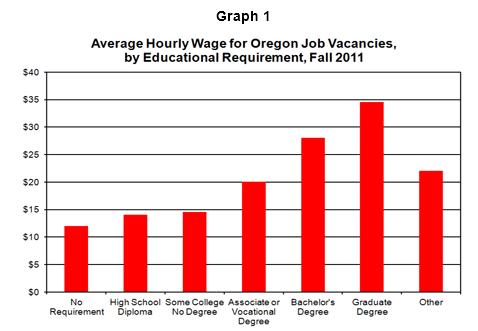