On the one hand, it’s easy to laugh at those who get overly excited about one-tenth of one percentage point. On the other hand, as Robert Barro points out, “increases in growth rates by a few tenths of a percentage point matter a lot in the long run and are surely worth the trouble.”

The key qualifier is “in the long run.”

Over the long run, Oregon’s personal income growth per person has lagged the rest of the US by two to four tenths of a percentage point. It’s not enough to notice from year-to-year, but the impacts compound over time.

At the end of World War II, Oregon’s per capita personal income was 8.5 percent higher than the US as a whole.

Last year—even with the one-tenth of one percentage point advantage—Oregon’s personal income per person was 9.0 percent lower than the US as a whole.

Per Capita Personal Income Growth, Oregon vs. US 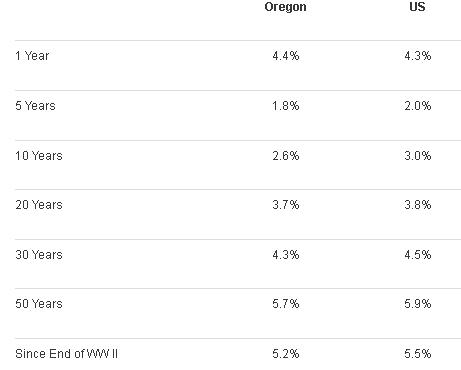