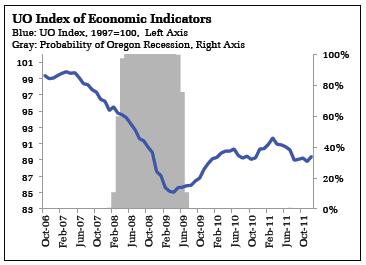 – Economic activity rebounded in Oregon in the final month of 2011. A sharp increase in the Oregon Measure of Economic Activity from -1.11 to -0.28 – close to the average growth established over the 1990-2011 period – pulled up the three-month moving average to -0.80. The University of Oregon Index of Economic Indicators™ gained 0.7 percent in December, rising to the highest level since July.

– The manufacturing and services sectors all made positive contributions to the measure of economic activity, while the construction and household sectors remain a drag. Note the two employment components of the construction sector were positive. Residential building permits remain weak.

– Improvement in the UO Index of Economic Indicators was widespread; none of the components deteriorated during the month. Residential building permits were effectively flat during the month and, while at low levels, remain above the recent low of last August.

– Mirroring national trends, initial unemployment claims dropped again to their lowest level since February 2008. This is a hopeful sign that conditions are improving to the point at which employment growth will accelerate. Relatedly, employment services payrolls edged up, suggesting that an upward demand for new hires.

– Compared to six months ago, the UO Index has fallen 2.6 percent (annualized), an improvement compared to the previous month. This brings the decrease above the -2.75 percent mark that has been associated with Oregon recession in the past. This suggests room for optimism regarding the forecast for 2012; the decline in the UO Index this past fall may prove to have been a “false” recession signal.