Let’s suppose that for some reason you expect the whole issue of self-service gas in Oregon to be brought up again in a public forum. It might be best, then, to be prepared for some blowback.

So, though I have written extensively about self-service gas here in the past let me take a moment to summarize my take on the issue.

I think that the banning of self-service gas is an unnecessary regulation and a costly one: it costs every Oregonian in time and money. But even if you think I am wrong about the material gains to allowing self-service gas, there still is little justification for the policy.

The main argument I hear is that the policy “creates jobs” and by allowing self-service gas you will send gas station attendants to the unemployment line. First, would it were so easy to solve the unemployment problem: just mandate that all businesses employ more people! Every grocery store must have a checker and a bagger, no more ATMs – every bank must only use people for transactions and so on… Hopefully you can see the logical fallacy – costs for businesses rise causing prices to rise, demand for their goods and services fall which lowers revenue causing businesses to cut back on overall staffing and soon you find that instead of increasing employment, you have caused it to rise. Rigidities in labor markets create inefficient distortions – they raise prices and and lower employment.

But you say, we are just talking about a small segment, surely there won’t be any overall affect on the economy. To which I respond, why not? What is exceptional about gas? In fact, I think retail gas is one of the most influential products around because it represents a significant cost for so many other businesses. Every extra penny in the price of a gallon of gas, every extra minute you spend waiting at the gas station is a drag on the economy – the effects are widespread and small on an individual level for sure but when you start adding them up they become quite large.

Let’s do a little basic back of the envelope calculation from some numbers provided to me by Josh Lehner of the Oregon Office of Economic Analysis. 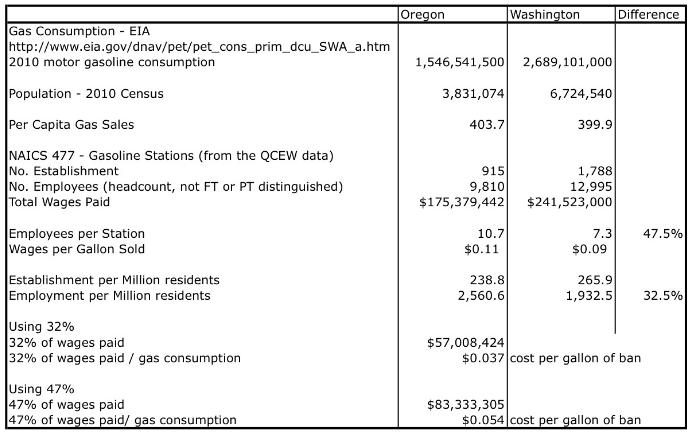 Using Washington as a comparison and extrapolating from the extra employees per station or the extra employees per population and using the average wages paid per gallon of gas, you get the extra cost of these additional workers per gallon of gas as 3 to 5 cents per gallon. Now there are MANY caveats here, there are general equilibrium effects that would happen that I am ignoring as well as the fact that Washington has a higher minimum wage and so on. But a few other numbers jump out – notice that there are fewer gas stations per volume in OR than in WA, suggesting to me that the added costs of the extra employees depresses the number of stations overall. This suggests slightly lower price competition which is very important in keeping retail gas prices down.

What of the time cost? Well suppose it takes an average of only 30 seconds more to get gas in Oregon than it does in Washington. No big deal right. Well with 915 stations serving an average of, what, 100 customers a day, this adds up to roughly 750 hours a day or 278,000 hours a year of lost time. Again all very rough but you get the idea at least.

There are other defenses from the granny argument – some people need it – to the environmental one – more expensive gas is good. To which I respond, you can still mandate service on request and if you want to make gas more expensive for environmental reasons, you can do better with a Pigovian tax and then you can use the revenues to offset the damage done.

In the end, it is quite obvious this is more about emotions than anything else: I hate waiting at a gas station for what I consider an unnecessary reason, just as others enjoy it as a little Oregon quirkiness. But it is not like I lie awake worrying about this.