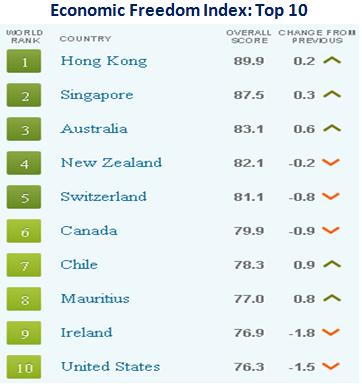 Economic freedom declined worldwide in 2011 as many countries attempted — without success — to spend their way out of recession, according to the 18th annual Index of Economic Freedom, released today by The Heritage Foundation and The Wall Street Journal.

“The mounting burden of reckless government spending has overwhelmed gains in economic freedom in other policy areas,” write the Index editors. “Tension between government control and the free market has heightened around the world, particularly in developed countries.”

Hong Kong and Singapore finished first and second in the rankings for the 18th straight year. Australia and New Zealand ranked third and fourth, and Switzerland fifth. Canada finished sixth, slipping almost a full point and falling out of the group of “free” economies into the “mostly free” category.

Chile took seventh place and moved almost a full point toward greater economic freedom. Mauritius was eighth with an overall score of 77 and became the first Sub-Saharan country to rank among the top 10. Ireland finished ninth to best the United States, which dropped to tenth.

Greece’s Index score declined the most, plunging nearly five points to 55.4. This put it in the middle of the pack of “mostly unfree” economies. Many of Greece’s European neighbors also suffered from exploding government budgets; 37 of the 43 European countries ranked in the Index lost ground in the spending category.

Zimbabwe finished next to last among the 179 countries rated but showed the biggest gains in economic freedom. Its score jumped 4.2 points to move within two points of Cuba at 26.3. Guinea-Bissau jumped 3.6 points, and Iceland improved by 2.7 points.

The Index also studies economic freedom on a regional basis. In 2011, only the Sub-Saharan Africa and Asia-Pacific regions advanced. The other regions — South and Central America/Caribbean, Europe, Middle-East North Africa and North America — all declined.

North America experienced the sharpest drop — a 1.3-point loss. All three countries in the region — the United States, Canada and Mexico — showed declines.

In Europe, 80 percent of the 43 countries studied are “mostly free” or “moderately free.” Only two, Belarus and Ukraine, are “repressed.” Nine of the top 20 are European countries but all nine lost economic freedom compared with the previous year.

The sovereign debt crisis in Europe threatens growth, the editors note, but for now it serves the valuable purpose of forcing leaders to make tough decisions on spending.

In Latin America, Chile ranks seventh in the world and first in the region, the fruit of low spending levels and innovative fiscal policies. Guyana was the biggest gainer, up 1.9 points and moving into the “mostly free” category.

Cuba is at the back of the pack and third from the bottom in the world. Venezuela, Bolivia, Ecuador and Dominica, all heavily influenced by Cuba, performed poorly.

Overall, the region continues to suffer from corruption and weak property rights, both owing to a weak tradition of rule of law.

The Asia-Pacific region dominates both the top and the bottom of the rankings. Hong Kong, Singapore, Australia and New Zealand finished 1-2-3-4 respectively worldwide. North Korea is ranked last in the world and Burma, the Solomon Islands, Uzbekistan, Turkmenistan and Timor-Leste all rank 160th or worse.

The Middle East/North Africa region had been making slow but steady progress, but it gave up ground as the turmoil of the “Arab Spring” uprisings damped economic reform. Bahrain (12th) remains the only country in the region in the top 20, and Qatar (25th) moved up 0.8 points to enter the mostly free category for the first time.

The 2012 Index was edited by Ambassador Terry Miller, director of Heritage’s Center for International Trade and Economics; Kim Holmes, Ph.D., Heritage’s vice president for foreign policy studies and director of the Davis Institute for International Studies; and Edwin J. Feulner, Ph.D., Heritage’s president. Copies of the Index (484 pages, $24.95) may be ordered online at www.heritage.org/index or by calling 1-800-975-8625. The full text, including charts and graphs, also is available online.