PORTLAND, Ore. – Today, business and civic leaders released the latest economic study of the Portland-metro area, examining how the region compares to the U.S. average, other metro areas and, most significantly, to its expected performance. The study is part of the Value of Jobs coalition’s efforts to raise awareness of the importance of private-sector jobs and income and wage levels and their connection to the region’s quality of life…

– Portland-metro suffered significantly greater downturns during recessions when compared to the average for U.S. metros.
– In the most recent recession, Portland-metro’s per capita employment dropped by 8 percent (or by 81,200 fewer people employed), more than the U.S. metro average and only 17,900 new workers have been added since early 2010.

The report’s data and analysis were compiled by ECONorthwest for the Value of Jobs Coalition, which includes the Portland Business Alliance, Associated Oregon Industries, Oregon Business Association, Oregon Business Council and the Port of Portland.

To view the report, visit www.valueofjobs.com. 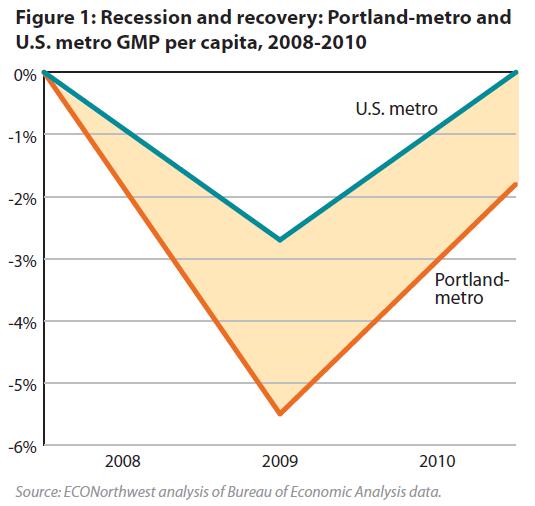