Yep, consumers continue not only to spend, but to increase their spending in most months. Here’s the latest data: 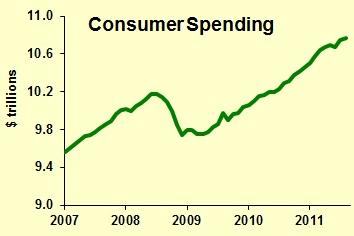 Over the past 12 months, total consumer spending has increased 4.5 percent. I hear people say that consumers are maxed out on credit, no longer can dip into housing equity, and don’t have jobs. So how can they spend?

Keep in mind, first of all, that our 9.1 percent unemployment rate works out to a 90.9 percent employment rate. Double check my math if you like.

The savings rate is 4.5 percent, much higher than at the peak of the boom, so consumers in the aggregate are not being hugely irresponsible (though most folks need a much higher savings rate to be financially secure in retirement).

How can people increase their spending by 4.5%? Well, after-tax incomes are up 4.7 percent in the past 12 months. Here’s how we reach that figure. First, employment has risen by one percent, with average hourly earnings up about two percent. So wage and salary earnings have increased three percent. The big key to the increase in take-home pay is the cut in Social Security taxes in January 2011, which reduced the employee’s tax rate from 6.2 percent to 4.2 percent. The tax cut was probably effective in boosting consumer spending.

What’s the outlook? The President wants to extend the temporary Social Security tax cut. Most members of Congress will concur. With everyone agreeing, what are the odds that Congress will actually act? Not that great, but we’ll see how the politics work out. I think that employment will gradually improve, with the emphasis on gradually.

Business Planning Economics: Don’t write off consumers. The exuberance of the boom may be gone, but folks are still spending money, and will continue through 2012, barring a double-dip triggered by Europe’s crisis. That’s not my most likely outcome, but it’s certainly possible.