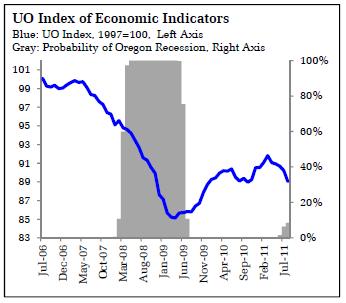 The University of Oregon Index of Economic Indicators™ fell 1.3 percent to 89.0 (1997=100) in August 2011, a fifth consecutive monthly decline. Compared to six months ago, the UO Index has fallen 4.4 percent (annualized) and less than half the components have improved or held steady over that period of time. In the past, sustained declines of this magnitude foreshadowed labor market recessions in Oregon.

• Overall nonfarm payrolls (not included in the index) continue to move sideways since the beginning of the year. The July gain was subsequently revised downward to a loss of 3,300 jobs, while only 800 jobs were added in August.

• The six-month decline in the UO Index, if sustained, is consistent with at least a labor-market recession in the Oregon economy. A similar pattern took hold after the 2001 recession, as the slow pace of the national recovery weighed more heavily on Oregon, dragging down nonfarm payrolls.

• The measure of Oregon recession probability computed by University of Oregon Economics Professor Jeremy Piger rose significantly in the past three months from essentially zero to 8.6%. Also note that the recent weakness in Oregon labor markets is also consistent with impending recession.

• It is possible, however, that the UO Index is overstating household weakness – consumer sentiment has been lower than expected given the growth in consumer spending. Moreover, the data is subject to revisions – a similar decline last fall proved to be short-loved and later revised away. That said, the economy is clearly very fragile and vulnerable to further negative shocks such financial market disruption as a consequence of the European debt crisis.

For an in-depth look at economic challenges as we navigate through what is once-again a challenging period, please join us at this year’s Oregon Economic Forum!

Special thanks to our presenting sponsor, KeyBank. Additional sponsors who help make this event possible include Providence, The Portland Business Journal, the Portland Business Alliance, the Port of Portland, Langley (formerly Ashforth Pacific) and Collier’s International. We also received support from the US Delegation of the European Commission