This is an ugly calculation. My recently updated economic forecast through 2013 shows a wide gap between actual output and potential output. That is roughly equivalent to unemployment being above normal of five percent or so.

In the last year of my forecast horizon, 2013, I predict GDP growth of 3.5 percent. If that pace of growth continued year after year (which I am not actually forecasting), how long until we’re back to normal? Actual GDP equal to potential GDP, and unemployment about five percent?

2020. That’s not an eye exam result, it’s the year we’re back to normal if GDP does not accelerate beyond the rate of my 2013 forecast. 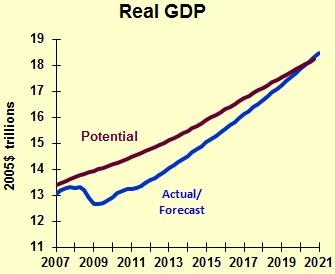 My best estimate? GDP growth will accelerate, especially once we work through the excess housing supply. So we should get to normal much sooner than 2020. However, it’s well worth noting that current growth rates are dismal, even for relative optimists like me.