The economy is certainly weak. The latest report on GDP showed sub-par growth in the second quarter. Revisions to past data, which occur every summer, showed that the first quarter was even worse than we previously thought. Here’s a comparison of GDP growth rates, with “old” indicating the official data as released prior to today, and “revised” indicating the new view. I’ve highlighted the significant differences. 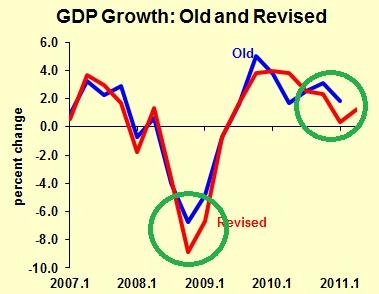 Looking at past history, the recession was worse than we previously thought–not a surprise, really, when you think about the sharp decline in employment at the time.

The bigger surprise is the downward revision of first quarter 2011, as well as fourth quarter 2010. The latest monthly numbers show us slumping, and this data release confirms it.

Where are we going from here? I continue to think that the time lags on monetary policy are long, and thus the benefits of the Federal Reserve’s quantitative easing will be felt in the second half of the year.

Note on the statistics: the government revises official statistics periodically because … it really does not know everything. Early announcements are based on surveys of a sample of companies and people, plus educated guess-work. Over time, more tax returns are files, informational returns are filed. Periodically, a business census is done, such as the Census of Manufactures which is conducted every five years. The statisticians take the fuller data, but still have some magic to do. Those periodic censuses are used to nail down certain points (like every fifth year’s level of output), with lesser quality data used to estimate the quarterly fluctuations between the fifth-year data points. In addition, more data give us better seasonsal adjustment, which itself consitutes a revision. This data stuff is not political; it’s simply good statistics.