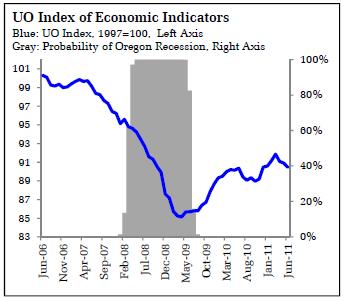 The University of Oregon Index of Economic Indicators™ fell 0.5 percent to 90.5 (1997=100) in June 2011, compared to a revised 90.9 the previous month. This is the third consecutive monthly decline.  Highlights of the report include:

• Adjusted for inflation, nondefense, nonaircraft capital goods orders edged down during June and remain essentially flat since last December. Similarly, Oregon weight distance revenue – a measure of trucking activity – has been trending sideways since a period of initial gains at the end of the recession.

• Consumer confidence (smoothed with a five month moving average) fell in June; consumer spending actually declined in the second quarter of this year, a substantial weight on US economic activity.

• The national and state economies slowed dramatically in the first half of this year. While on net indicators do not indicate recession is imminent, the recovery is clearly fragile. This is especially discouraging given that the recovery has so far fallen short of that necessary to reverse the negative effects of the recession.

For my take on yesterday’s Federal Reserve statement, you can listen to my interview on NPR. My comments are midway through the program:

Special thanks to our presenting sponsor, KeyBank. Additional sponsors who help make this event possible include The Portland Business Journal, the Portland Business Alliance, the Port of Portland, Ashforth Pacific and Collier’s International. We also received support from the US Delegation of the European Commission