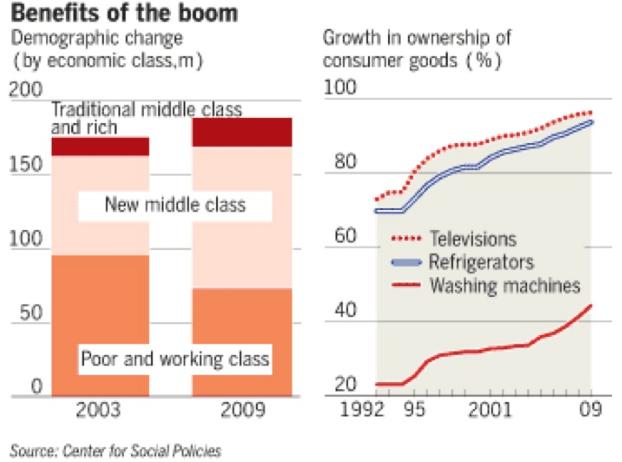 I direct your attention to an excellent article from the Financial Times (whose pay wall seems to allow access) about the affect that growth has had on Brazil’s middle class. Last fall I wrote about the dizzying sensation of coming from an economy that is in the depths of a deep recession to an emerging economy in the midst of a economic boom as I traveled to São Paulo. Economic boom sounds like it should be great for all, but it does put pressure on prices which hurts if your income is not rising as fast.

But Brazil, which has long been one of the most unequal countries on earth, has finally seen real progress in raising people out of poverty and lowering inequality (thought the very wealthy have done very well too) for example the Gini index has fallen from over .6 in the late eighties to almost .52 today. So growth overall has been very good for the country and its poor, but it does have many subtle consequences.

Here is an excerpt from the FT article:

Speaking to Melissa Beeby, you would not know that Brazil is enjoying its most prosperous period since the “economic miracle” of the late 1960s – as the country’s last great boom is known.

Like other members of Brazil’s so-called “traditional” middle class, things have become harder for Ms Beeby in recent years. The prices of meat and petrol have doubled, highway tolls have risen and eating out or buying property have become prohibitively expensive.

“The middle class basically is in debt. That’s how people manage,” says Ms Beeby, who runs the Bridge Restaurant at the British Centre in São Paulo. “People have more dinners at home and when they do go out, they go to simpler places.”

The story of Brazil’s success in lifting millions of people out of poverty over the past decade has really been a tale of two middle classes.

While headline economic growth has not been as spectacular in Brazil as in China and India, at an average of about 4 per cent a year between 2003 and 2010, the balance of income distribution has improved more rapidly in Latin America’s largest economy than in the other large emerging markets.

On the winning side have been an estimated 33m people who since 2003 have risen to the ranks of the so-called “new middle classes” or above. Today, 105.5m Brazilians out of a total population of 190m are members of this group, who earn between R$1,200 ($767) and R$5,174 per household. Also better off are the rich, who have profited from a stock market, commodities export and consumption boom.

On the losing side, say sociologists, are the 20m or so people of the “traditional” middle classes who earn more than R$5,174 per household. Unlike in India, where the old middle class benefited from the creation of new industries, such as information technology outsourcing, many in the Brazilian middle class complain of rising prices, taxes, congested infrastructure and increased competition for jobs.

I encourage you to read the rest at the FT and a related article at the Newsweek site.