Non-tech businesses are at risk from the technology boom. Do you run a medical clinic, a retail chain, or a manufacturing company? You are at risk of losing important talent—greater risk than may be obvious. However, strategies to retain your geeks can help you survive.

You may say, “It’s not fair. My business is not booming. Why should I have to compete with LinkedIn, Facebook or Apple?”

Okay, it’s not fair. Didn’t your father tell you life isn’t fair? But it’s the reality.

Even non-tech companies risk losing their IT employees.

You may think that your information technology staff lack the cutting edge skills so valued by Silicon Valley start-ups, but don’t be so sure. For example, a hot area right now is creating apps (short for applications) for cell phones. “Gee, my guys don’t know anything about that,” you think. Wait. Are you sure they are not writing cells phone apps in their spare time? Some of the iPhone apps have made their authors millions of dollars.

Once your people know C or Java, they learn about some tools provided for free by Google or Apple to help people write apps. For simple apps, this is all that’s needed. For more complex apps, the programmer may need to write some code for the app to read and write from a database. There’s a good chance that your company’s programmers write that kind of code every day.

There are certainly some extra tricks that the programmer will have to learn to do a great job writing a smart phone app, but these tricks are learnable.

This is just one example. There are many more possibilities, though some of your staff won’t fit into the new world. A person who mastered COBOL 30 years ago and does not want to learn anything new will be a stable, reliable staff member. Your bright, ambitious people, however, have already started wondering what life would be like elsewhere.

The connection between the tech boom and your company applies even if you only have people with fairly basic skills. Consider: 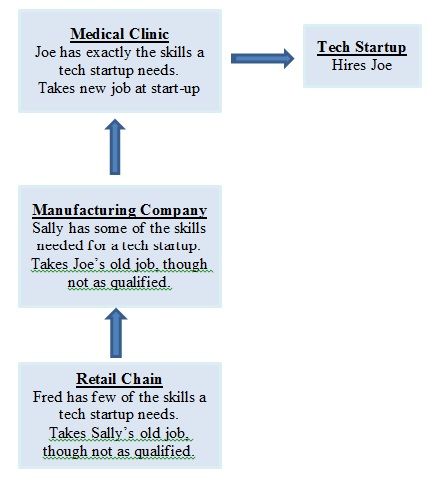 As we economists sometimes say, everything is connected to everything else. The tech boom is trickling down to workers who are only mildly techie.

What’s driving the tech boom, and will it continue?

The most obvious cause of the tech boom is the rise of social media, such as FaceBook and LinkedIn, but they are actually symptoms of a more general cause: near-universal Internet access enables hugely more valuable improvements. Let’s begin with the obvious: young people who describe themselves as not heavily into Facebook are spending about one hour per day on the site (based on my small sample of friends and family under 30).

LinkedIn’s value to business is not so obvious without an example. My sales rep cold-called a woman in Sacramento. I entered the woman’s name into LinkedIn and found that she had a connection to a client of mine in Seattle. I emailed my Seattle guy, and he said that he knew the Sacramento woman pretty well, her boss even better, and he’d be delighted to recommend me to her. That’s the kind of connection we lost when we moved out of small towns.

As we see more and more good software, we demand more and more features. When I converted my paper address book to a database on my PCjr, back in 1985, I was enthralled that I could print labels for Christmas cards. Now I expect Act!, my contact management software, to not only keep names and addresses, but also history of all my contacts, random notes that I’ve chosen to add about the contacts, as well as my calendar. I synchronize my Act! database with my smart phone, so I have phone book and calendar on my cell phone. Now I wonder why my contact database does not synchronize easily with my accounting program.

In short, I want more and more connectivity, more ease of use, more applications that are easily tailored to my needs and wants.

The economics of programming further stimulates demand. I want a cool feature, like my calendar should remind to book air travel four weeks before a meeting scheduled more than 150 miles from home. A programmer works on the feature, giving it some flexibility to suit other users with similar but slightly different needs. Once the programming is done, all users can use it without any further resources allocated to the project. Once and done. If I’m the only person who wants a feature, then the feature will be pretty expensive. If, however, my need is typical of thousands of other users, then the cost per user is pretty small.

What does the future hold for tech demand?

Have all the programs been written already? I heard that said by a business professor advising a student not to major in computer science. The professor said that we had payroll programs, accounts receivable programs, etc. We had all business functions covered, so all that programmers would be doing in the future is mundane, boring adjustments to the existing programs. I heard that advice (I was an economics professor overhearing the conversation) back in 1978. Wow! What a spectacularly bad forecast, though one with a certain logic behind it.

I’m still not able to do everything I would like to be able to do on a computer smoothly, effortlessly, and without risk. Certainly there will be further demand for programming skills in the future.

What about the supply of programmers? Here the news is bad. Many students shun classes that require math. A report by Dice, a computer job website, quotes Joe Omansky, who is in the venture capital world, “There’s a definite lack of supply of high-level talent.”

What about talent that not so high level? Professor Tim Lindquist at Arizona State says “I can’t tell you the last time I had a student, even some of our poorer students, tell me they had trouble finding a job…. We have weekly requests, very consistent, looking for people.”

How to retain your IT staff

The first step is to recognize that your programmers, like all other employees, want recognition for their work. If the boss isn’t giving out pats on the back for good work, either re-train the boss or fire him.

The second thing that programmers want is to do good work, to earn those pats on the back. They want good tools and support. There are details of the programmer’s world that won’t make sense to non-tech executives (such as source control and daily builds), but if you ask your staff members what you can do to help them be more productive, they’ll help you learn.

Programmers want challenges. They are generally people who love programming, with relatively few people who hate the work but take the job because it pays better than Starbucks. Throw some hard problems at them, and then celebrate their success.

Help them build their skills. The programming world is not so much about credentials as about ability. Good programmers are looking to upgrade their skills. In fact, some choose jobs not so much on the money they’ll be paid as on the learning environment.

Techies want to work with peers who are technically good and highly motivated. It may be easier to retain two great programmers than to retain just one. Facilitate interaction and cooperation. If one of your key people leaves, be especially careful not to lose that person’s friends.

Pay them a competitive wage. Notice that this one comes last. Adding more pay won’t help you retain workers subjected to a bad boss.  People will tolerate being underpaid when they like their job, their co-workers, the challenges and the environment. However, at some point lower pay starts to rankle and irritate. If the boss is having a bad day just after a programmer looked at the salaries other people are getting, there may be a “take this job and shove it” moment.

Keeping tech salaries competitive can be difficult when the company as a whole is struggling. There may be a pay freeze in place, or at least a very “careful” attitude about raises. In a sector of the economy that is not doing well, caution regarding salaries makes sense. However, it won’t help the company to lose its technology talent. You lose some folks because you wouldn’t pay them ten percent more, and you may learn that their replacements needs 20 percent more. It’s vital that human resource personnel stay in touch with tech salaries, which recently have been rising far faster than most other types of jobs.

The tech boom is real, and its threat to non-tech businesses must be addressed. Like so many business problems, it’s not so much about technology as about old-fashioned management. Good management finds a way to keep talented people. More important, they know when they have to make an extra effort to do so.

Digg This
| Save to del.icio.us

Listed below are links to weblogs that reference Non-tech businesses are at risk from the technology boom: