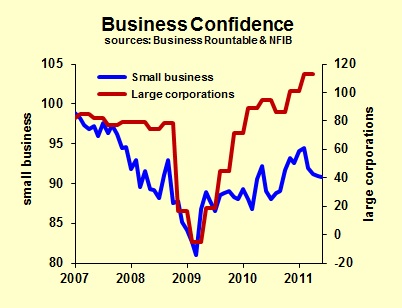 It’s always a little dangerous to compare one survey with another, but it sure seems that the corporate honchos are feeling better than they did before the recession, whereas small biz owners are up from the depths of the downturn, but not yet back to where they had been.

Better understanding comes (as usual) from looking at the hard numbers in financial statements. 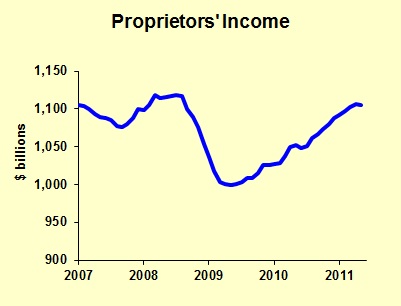 Earnings of small business owners (including partnerships) have not yet recovered from the recession. It’s possible that the gap is attributable to the substantial number of contractors among the ranks of small businesses. Nonetheless, the small business sector doesn’t look so rosy. I’m nervous, too, that the government’s estimate of small business earnings lags actual changes in business conditions. Thus the attitudinal survey at the top of this post may indicate another few months of downturn in earnings.

Corporations, in contrast, have been surpassing the pre-recession highs: 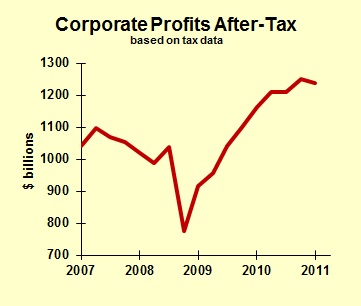 Not just surpassing, but smashing through the pre-recession highs.

Worrisome is the last obersation of both series: downward. (Note that the proprietors’ income series is monthly, while corporate profits are quarterly.)

Small business has complained about poor access to credit, and that may be a factor, though most lenders like to see profitability before credit. It may also be the case that the corporate profits figures are swelled by the benefits of bailouts to large banks and auto manufacturers. Hard to say.

However, it’s easy to see why small business is not hiring much.

Business Implications: If you sell to large corporations, don’t expect them to expand capacity in most cases. Instead, they will buy if you can help them lower their operating costs. They will spend money now to save money in the future.

If you sell to small business, look for them to limit current expenditures. A long-run value proposition does not sound as good as a way to conserve cash this month.