The latest report from the state Office of Economic Analysis (OEA) contained more good news than it has in quite some time. Job growth surged in the first quarter of 2011; over-the-year growth was faster than at any time since the first quarter of 2007. Additionally, OEA upwardly revised their forecast for 2011 job growth from their last report (March 2011). 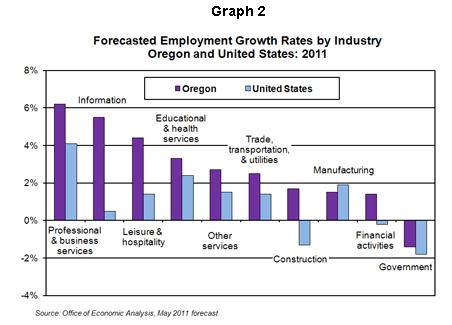 OEA expects moderate job growth throughout the rest of this year and 2012. Overall, the forecast calls for an increase of 2.4 percent in total employment this year followed by more of the same in 2012 (2.5%).

The private sector (+3.2%) will carry the day. Government, which typically lags the rest of the economy in recessions, will cut jobs this year (‑1.4%) as state and local agencies struggle to balance their budgets.

Professional and business services is expected to be the fastest growing broad industry with projected growth of 6.2 percent. The information sector, which includes newspapers, software, and telecom, will rebound in 2011 (+5.5%). Leisure and hospitality (+4.4%) will benefit from an increase in household discretionary spending.

Manufacturing will grow 1.5 percent this year, with gains in high tech and transportation equipment outweighing losses in wood products and nondurable goods. Construction will finally shake off the effects of the recession and eke out an anticipated gain of 1.7 percent. Financial activities is expected to grow 1.4 percent in 2011, as credit conditions continue to ease.

The Oregon Office of Economic Analysis started publishing an unemployment rate forecast for Oregon in a recent quarterly forecast. They predict that the jobless rate, which tends to be one of the last indicators to improve as the economy recovers, will drop from 10.2 percent in the first quarter of 2011 to 9.4 percent in the fourth. Declines will continue slowly in 2012 (8.5%), 2013 (7.4%), and 2014 (6.6%). 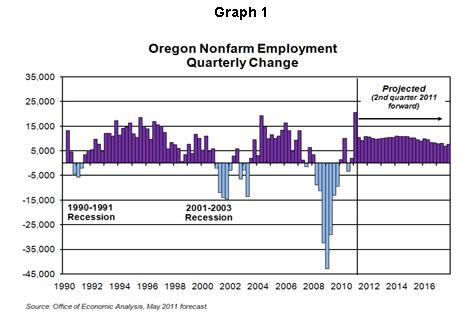