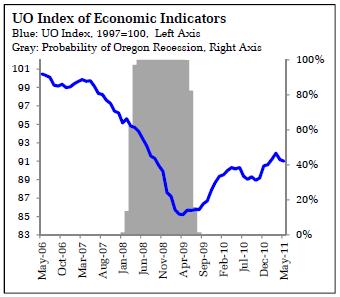 • On a positive note, core manufacturing orders gained, while the April figure was revised higher. Still, orders adjusted for inflation are flat compared to December; this indicator has certainly lost the momentum seen for much of 2010.

• Consumer confidence (smoothed with a five month moving average) was flat in April. The rise in commodity prices, particularly for oil, became a significant drag on consumers in the second quarter, with inflation adjusted personal consumption spending negative in both April and May.

• Rising commodity prices combined with the underlying drag of a weak housing market and spending weakness on the part of state and local governments to slow the pace of economic growth in the first half of this year. While the weaker data is not consistent with an impending recession, it is certainly a disappointment considering the stronger momentum evident at the end of 2010 and serves as a reminder that the pace of recovery has proven to be relatively slow.

This year we are bringing two outside speakers. We are excited to have Brad DeLong, professor of economics at the University of California at Berkeley, to discuss the likelihood of a European-type debt crisis in the United States. We are equally excited to bring Glenn Rudebusch, Senior Vice President and Associate Director of the Economic Research Department at the Federal Reserve Bank of San Francisco. Glenn will bring his insightful analysis of the direction of the US economy. We will also continue our tradition of bringing economists from the University of Oregon, including Forum Director Tim Duy. In addition to a an Oregon economy 2012 preview, Tim will present new research on state and regional economic indicators?

Special thanks to our presenting sponsor, KeyBank. Additional sponsors who help make this event possible include The Portland Business Journal, the Portland Business Alliance, the Port of Portland, and Ashforth Pacific. We also received support from the US Delegation of the European Commission