We are currently under-building commercial real estate, which will lead to a mini-boom. The pipeline of new buildings is thin, so as the economy improves, there will be very little additional space coming to market. Occupancy rates and rents will rise. The resulting increases in operating earnings will cause the mini-boom. However, a true boom requires easy money, which is not part of our future, at least over the course of the upcoming cycle.

As a good rule of thumb, we spend about one-and-a-quarter percent of gross domestic product on commercial and health care buildings. That figure was steady through most of the 1960s and ‘70s, until the Savings and Loan industry diversified into financing commercial real estate. At the peak in 1985, two percent of GDP was devoted to commercial construction. That overbuilding as well as the tighter lending rule associated with the FIRREA legislation led to below-normal construction in the early 1990s. The 2001 recession cut development levels again. 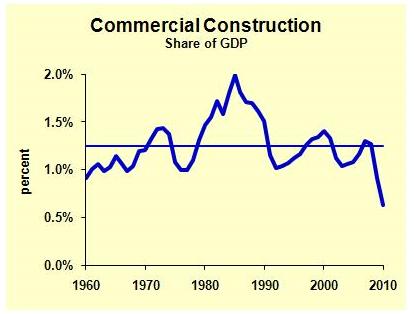 The recent economic boom and housing boom was not a commercial construction boom. The best years of the last decade were below the long-run average. In other words, the American economy entered the recession without an excess supply of commercial structures.

Last year commercial construction amounted to just 0.6 percent of GDP, less than half its long-run average. One might argue about whether the long run average is drifting up or down over time. However, there’s absolutely no way that the current construction pace constitutes the new normal.

I scanned a few market reports from around the country and found the pattern remarkably similar. Washington DC is one of the strongest economies in the country. Office vacancy rate dropped a little in the fourth quarter of 2010, but at 14.9 percent it’s still too high. Grubb & Ellis reports that last year net absorption was 4.5 million square feet, but there was only 0.7 million square feet of space under construction. That pace of new building activity is appropriate for an overbuilt market, but it won’t be appropriate forever.

Phoenix has a middling unemployment rate—9.3 percent, which is about average—and its industrial market is very soft, with a high vacancy rate that is gradually dropping. CBRE reports that net absorption last year was over six times greater than space under construction.

One of the worst economies of the large metropolitan areas is Tampa, where the unemployment rate is 12.4 percent. The retail sector has a fairly high vacancy rate, but in the fourth quarter net absorption was 323,000 square feet, according to Cushman and Wakefield. Completed retail space: a mere 18,500.

The economy is gradually expanding. The pace of growth is disappointing, but it’s definitely positive, triggering increased occupancy of all types of properties, in almost all parts of the country. Net operating income will improve, initially because of rising occupancy, and eventually from rising rents.

Improvement in the economy does not always trigger improvement in net operating income, because developers often anticipate the economic growth and build new space in anticipation of greater demand. That increase in floor space can sink rents even in a growing economy.

Today, however, there is hardly any speculative new construction. Banks and other lenders have tightened credit standards. They are skeptical of new projects given today’s high vacancy, and they are demanding very high equity positions before lending to developers. The lower loan-to-value ratios make it harder for a developer to earn the return that covers the risk. In addition, some developers who are convinced that their ideas are worthy projects even at a low loan-to-value simply do not have access to the equity capital needed to satisfy banks. The result: no one is building today in anticipation of tomorrow’s demand.

This improvement in commercial real estate will not become a full-blown boom, however. A real boom requires easy money, and plenty of it. Credit standards will remain high throughout the next cycle, and long-term interest rates will gradually rise as the global economic expansion fuels demand for credit. Call it a mini-boom, but it’s still a great deal better than what we’re experiencing now.

What does this coming mini-boom mean for people in the commercial real estate business? Developers will need to start planning their new projects, which may involve more development of equity sources than development of dirt. Timing is crucial and will vary from market to market. Too early and developers will have a few bad years as they put property into still-weak markets. The greater risk, however, is too late, in which case others have already filled the need.

Tenants should consider extending their leases now, while the market is still soft. In a couple of years most markets will have shifted to favor landlords.

Landlords should be cautious about lease extensions. Those who need the cash flow may sign new leases at current rates, but those who can wait a couple of years will be well rewarded for their patience.

When the real estate market turns, we’ll all look back and say, “We should have seen it coming.” You can see it coming right now, even though the turn is a few years away.