Yesterday Standard and Poor’s, a credit rating agency, lowered its outlook on the prospect of the US political system making serious progress on dealing with the mounting debt. There was no change in the actual rating they give to US treasuries and bonds which remain at AAA, but it hardly matters because no one cares what S&P has to say about US debt.

Why? Well, the point of the rating agencies is to tell us something about bonds that we don’t know. For example, how safe are the bonds of Kenosha, Wisconsin? 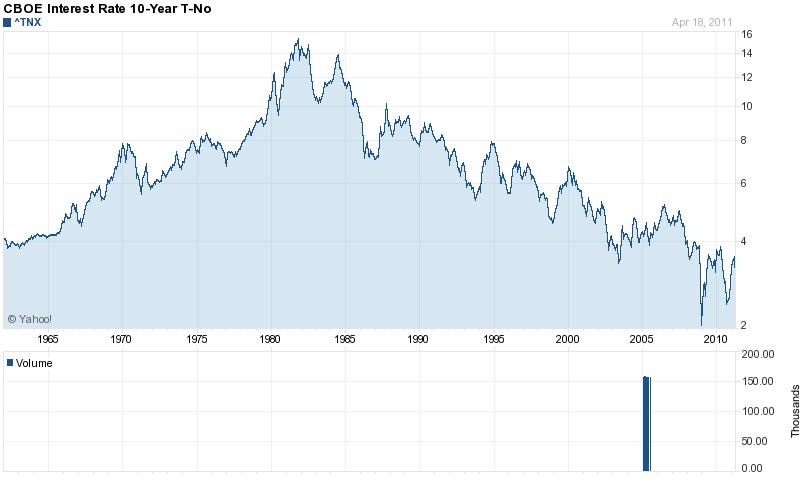 The bond market confirms what everyone knows, the US is not going to default on its debt obligations. US debt has been a safe haven for money during the global recession.

S&P’s announcement has not gone over well with some economists, here is a sampling from the NY Times’ ‘Room for Debate’ feature:

The Standard & Poor’s rating firm should be embarrassed. If there is any political judgment at work here, it is S.&P. falling for politically motivated scare mongering. But given its track record with mortgage securities and collateralized debt obligations, why should we be surprised to see a rating agency relying on conventional wisdom rather than analysis?

The whole premise of the rating is incorrect. The U.S. may eventually experience unacceptable levels of inflation, but the experience of Japan shows that stop-and-start fiscal stimulus is more likely to result in protracted near-term deflation.

First, I have stopped paying any attention to anything that S.&P. says or does. Its performance over the past decade has revealed it to be incompetent and corrupt – it sold its AAA ratings to the highest bidder. It is the broker who lost all your money, the girlfriend who cheated on you, the partner who stole from you. Since the portfolios we run never rely on its judgment or analysis, we simply do not care what it says about credit ratings.

Standard & Poor’s lowering the outlook for U.S. debt to negative is less the canary in the coal mine than it is another faint reverberation from a familiar echo chamber. The ratings agencies don’t know anything more than people who have read newspapers covering this issue.

They don’t influence market sentiment as much as they reflect it. In saying that U.S. policy makers may not be able to meet the country’s medium-term budgetary challenges by 2013, they are not telling us anything we don’t already know.

Of course Smith and Ritholtz referring to the central role the credit rating agencies (who are paid by banks for their services) had in the mortgage market meltdown and subsequent recession. These agencies gave AAA ratings to MBS and CDOs that their clients were selling, when in fact they were junk.

Which gets us back to what they agencies are supposed to do – tell less informed investors about the relative risk of investment that they have researched thoroughly. As many have pointed out, however, they make all their money from the very firms whose investment vehicles they are supposed to analyze subjectively. The basic economics of incentives suggests that this is not going to happen. And for these CDOs, it didn’t – they rated stuff they didn’t understand, and should have been suspicious of, AAA when in fact it was toxic.

Eichengreen is essentially making the same point that I am: S&P doesn’t really tell us anything we don’t know about the market for US debt and if you want to know how the insiders feel, just look at the market equilibrium prices where there is little sign of a risk premium being charged.

So in the end the S&P announcement got lots of press but was, to me, a complete non-event.