Japan’s terrible earthquake has economic implications for American manufacturers, in addition to the terrible human consequences. Japan’s economy is large and diverse, with strong business ties to the United States. The key point to ponder is that Japan’s businesses play three roles with respect to American manufacturers: customers, suppliers, and competitors.

Japan runs a trade surplus with the U.S., but that does not mean we don’t export to her. Last year we sold a total of $60 billion worth of stuff to Japan, about three-fourths of which was manufactured goods. Our best-selling products in this trade are chemicals, computers and other electronic devices, and transportation equipment, mostly airplanes. Although these categories lead the list, every other category shows significant American exports to Japan.

In all cases, Japan’s earthquake will slow American exports in the short-term. The damaged infrastructure, including transportation systems and the electric grid, will cause Japanese buyers to tell us to slow down our shipments. Over the longer-term, when rebuilding is critical, American manufacturers will enjoy increased sales in some niches, especially wood products and some machinery that will help repair or replace damaged infrastructure, homes and factories.

The Japan of the future may not look like the Japan of the recent past. Some businesses over there will never recover. Imagine a company that was operating at a very low profit margin, battling for global market share with China or other Asian countries. If the factory is seriously damaged, it may not be worth rebuilding. Or imagine another company which was not damaged, but whose supply chain was interrupted for several months. When it’s ready to go back to production, it may learn that its customers have found other sources that they are now happy with. The impacts will vary from company to company, but the total impact will be slightly negative for Japan as a customer of American manufacturers.

Japan is not only a customer, but also a supplier to businesses in the United States. Among the industrial goods that we buy from companies in Japan, the largest elements are computers and electronics, machinery, and chemicals. It’s interesting that chemicals are both a major export and a major import. The detailed sub-categories show some things we import a lot of, such as printing inks,
and other products we are large net exporters, including basic inorganics. Many American companies will find their supplies interrupted and will have to scramble to find alternative vendors. Japan invented just-in-time manufacturing. Although its production costs are not the lowest, it has earned a reputation for reliability. American companies, which already to reporting slower delivery times from their vendors, are now faced with an additional supply chain challenge. In the near-term, this will certainly cause bottlenecks in some factories here in the states. Over the longer term, American businesses will find that many of the alternative vendors they turned to are quite satisfactory. Some of our purchases from Japan will resume quickly, but other purchases will be lost forever. 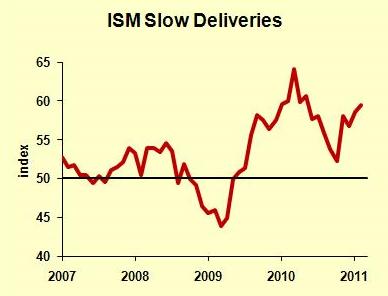 The imperative action step for American manufacturers today is to review their vendors for Japanese businesses that may be impacted. One does not want to blacklist Japanese companies, of course, but to make inquiries. It’s a large country, and many of its factories are totally untouched, with logistics systems that are still functioning smoothly. However, it’s imperative for a company to know the status of its vendors. Checking for Japanese suppliers is not enough. Purchasing managers need to check with all vendors to see if their ability to deliver will be impacted by the earthquake. A modern supply chain may have many links. If any one of those links goes back to Japan, then reliability needs to be evaluated, pronto.

Another supply chain problem will impact some American companies: their customers will have to cut back operations due to Japanese suppliers not able to deliver. Boeing sources some 35 percent of its 787 Dreamliner components from Japan. A disruption of their supply chain could trigger a production cutback that would impact many domestic suppliers to Boeing. (Boeing is currently assessing its suppliers, and no announcement of a production cutback has been made as of this time.)

Finally, Japan is not only a customer and supplier but also a competitor. The largest trade imbalance between our two countries is transportation equipment, mostly cars. Despite the many U.S. factories owned by foreign car companies, we still imported $47 billion worth of cars and trucks last year–and that was a lousy year for car sales. Look for many American companies, not just in automobiles, to gain global market share at Japan’s expense. Businesses that have faced stiff Japanese competition may be able to make inroads in many areas. It may seem heartless to some that American businesses would profit from Japan’s misery, but it would be even more heartless to fail to provide goods to the people who want them. There’s no use spreading the misfortune any wider than it needs to be spread. 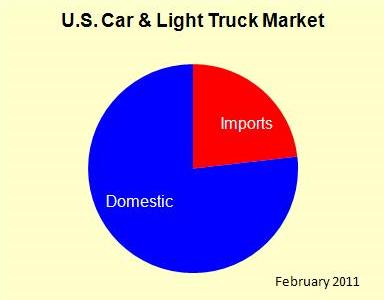 However, there is a danger to American companies that expand to fill the void created by Japan: these gains may be temporary. As Japan gets its plants and transportation system going again, it may well win back sales lost during the turmoil. American companies that gain sales in the near term should be cautious about assuming the sales will last. The worst strategy would be to commit to large expenses, betting on the new sales continuing even as Japan recovers, only to lose to the old Japanese companies that have rebounded solidly.

Japan’s earthquake throws a giant monkey wrench into the global economy. American manufacturers have to think carefully to gain from the opportunnities and avoid the risks that come from chaos.