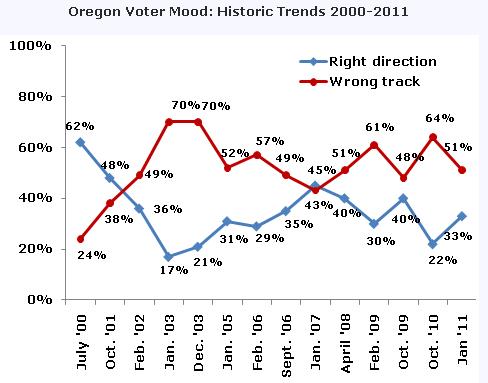 The majority of Oregonians today are still in a pessimistic mood, however, their negativity has tempered significantly in the past three months. On the issues front, however, not much has changed – voters continue to complain loudly and clearly that the economy is still the greatest challenge facing the state.

In terms of voter “mood,” fully 51% of voters say things in Oregon are headed off on the “wrong track,” while 33% say things are headed in the “right direction,” and 16% have no opinion. This is a marked improvement in political climate since our last measurement, taken in late October just before the 2010 mid-term election, when 64% said things were off on the wrong track and just 22% were positive in their outlook. Looking back, Oregonians have been in a negative mood for much of the past decade, however, the sentiment today is a far cry from the height of negativity, seen in 2003.

The Dow’s recent gains, perceptions of a more stable economic climate and leadership changes in state government are all likely contributors to the improved mood here in Oregon. Nationally, the mood is similar – the average of recent public polls show the national mood at 35% right direction, 58% wrong track (RealClearPolitics).

Voter “mood” can be an indicator of election outcome, and that was readily apparent during the 2010 mid-term elections. Incumbent officeholders typically fare better when people believe things are headed in the right direction, but are more vulnerable when the majority believes things are off on the wrong track. The anti-incumbent tide that swept the nation in November clearly reflected the mood of the electorate at that time.

The economy continues to take center stage in terms of voters’ day to day concerns – and they are looking to Salem for answers. In this survey, more than a third (36%) of voters responded top of mind that the State Legislature’s #1 priority this session should be “the economy and jobs.” Along similar lines, the second leading priority mentioned is “balancing the budget” (14%), followed by education funding (9%), education in general (5%), cutting taxes (5%), stopping wasteful spending (4%) and “affordable health care” (3%). Further, the concern about the economy is one that is shared equally among Democrats, Republicans and Independents.

Looking forward, Oregonians appear to be lacking clarity in terms of where the local economy is headed. We asked our sample if they anticipated 2011 would be “a lot better, a little better, the same, a little worse, or a lot worse” than 2010 for Oregon’s economy. While we found a plurality offering an optimistic outlook for 2011 (3% thought 2011 would be “a lot” better and 41% ventured it would be at least “a little” better than 2010), there is a majority that believes either things will get worse (17% a little and 8% a lot worse) or don’t expect any change in the coming year (28% say things will be the same). So while there are numerous trends and barometers telling us that things have “turned the corner,” the Oregon voting public, it seems, is in more of a “believe it when I see it” frame of mind.

Regionally, optimism about the economy in 2011 is higher in the Portland metro area than it is elsewhere in the state, and younger voters (age 18-34) are more optimistic than voters age 35 and older. Democrats are optimistic that 2011 will be better than 2010, but a plurality of Republicans believes things in 2011 will be worse, and Independents are divided in their outlook. 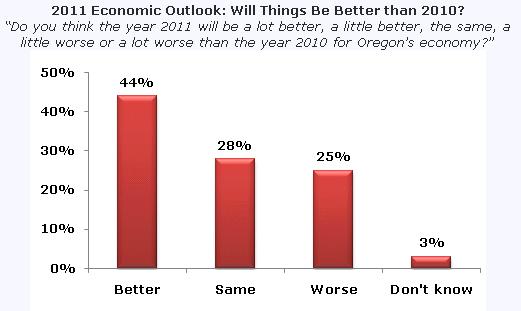