While the NBER (National Bureau of Economic Research), the arbitrators of recession start and end dates, declared the United States recession officially over in June 2009, the country has only recently generated positive job growth, weak positive job growth, but positive, and it is welcome. This has been a long and painful recession, and while millions are still unemployed, I believe we are finally seeing the initial (tepid) stages of a sustained recovery. 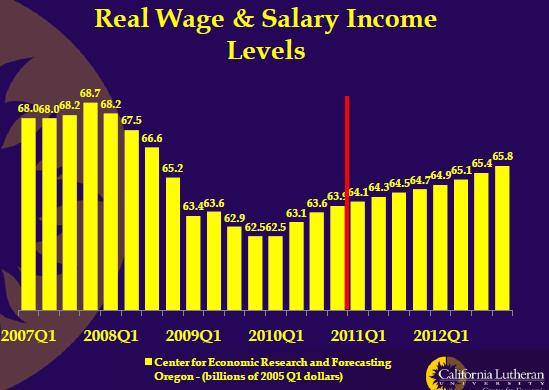 Can Oregon’s new-found job vitality be maintained? We’ll see, but we do note that Oregon’s job creation has been more volatile than the United States, being stronger in up markets and weaker in down markets. This would imply that Oregon’s new strength is sustainable. On the flip side, the nation’s recovery excludes real estate. This combined with manufacturing’s weakness, and the challenges of doing business in Oregon, will tend to weaken Oregon’s recovery.

Oregon’s GDP (Gross Domestic Product) growth rate has not shown the same vigor as jobs. While Oregon’s most recent quarter economic growth exceeded that of the United States, the margin was smaller than the jobs margin, and Oregon still lags the United States on year-over-year GDP growth. This implies that Oregon’s job gains have been in relatively low-productivity, low-wage, jobs. It is also something that we predicted last January. Still, the jobs recovery has been relatively widespread. Only manufacturing, construction, and financial services still showed year-over-year job losses at the most recent data release.

Retail sales have shown some nice gains in recent months, although there are some disturbing signs that their growth rates have slowed a bit very recently. The gains have been broad based. Each of Oregon’s counties has seen retail sales growth in recent months.

Real estate, discussed in another essay, continues to be weak nationally, and even weaker in Oregon. Delinquencies and foreclosures remain high. Sales are slow, and prices show no signs of renewed strength. Indeed, it is not at all certain that prices have yet reached their cyclical nadir. The World economy is not yet on a strong footing. The United States recovery is tenuous. Many state and local governments throughout the United States are facing financial stress. These troubled governments are potential sources of new shocks to a weakened financial sector. European weaknesses are well publicized, and they have the potential to create a new financial panic, one that could initiate a second decline.

Still, we are seeing the best economic data in years, and we at CERF are cautiously optimistic that we are in the beginnings of a sustained recovery.