Ireland’s Economic Crisis: A Brief Summary
By Bill Conerly,
Conerly Consulting, Businomics
Ireland’s economy was stagnant in the early years of the 20th century. Liberalization of international trade taxes and rules in the 1960s allowed the economy to begin keeping pace with the rest of Europe, but that wasn’t saying much. Government budget deficits in the 1970s and early 1980s were accompanied by European-style anemic growth. The budget deficits were resolved through spending cuts. Then other policy changes made it more difficult for the government to resume deficit finance.

The result was the “Celtic Tiger,” a name derived from Asia’s Four Tigers that had grown rapidly (Hong Kong, Singapore, South Korea and Taiwan). For 19 years in a row, Ireland’s growth rate exceeded that of Europe. 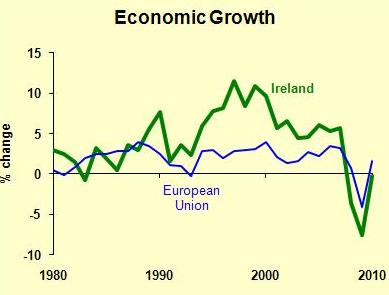 However, the real estate boom that swept the United States also swept the world, including Ireland. The nation had survived a housing bubble in the late 1990s, but the banking sector, emboldened by the global boom, doubled its assets in just three years, lending to Irish and non-Irish alike. When the global bubble burst, the banks were in a severe crisis. The government feared that institutional providers of funds to the banks would withdraw, leading to a collapse of the banking sector. To prevent such a run, the government guaranteed the senior debt of the banks. 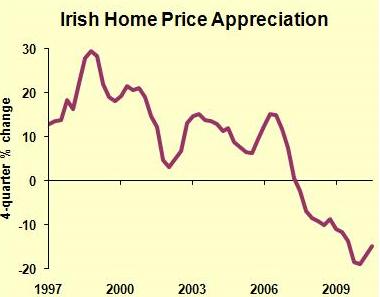 Most personal financial experts advise individuals against co-signing notes for friends and family members. Someone should have told Ireland that the advice is especially valuable to people going heavily into debt themselves. As recession hit the Irish economy, government spending accelerated. 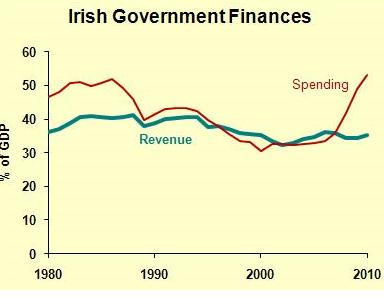 Now the Irish government has tons of its own debt, and its bank bond guarantees total 200 percent of GDP. Other European countries, as well as the International Monetary Fund, are pumping loans into Ireland to stave off a collapse.

The Irish government had resisted outside calls for the bondholders to take a haircut. (The Economist headline read, “Time to send the barber home?”) Allowing private creditors to escape damage seems silly at first, but it has more logic when the creditors had previously received an explicit government guarantee. A haircut for creditors could well be considered a default by the Irish government.

Looking around Europe, many banks in the core (France and Germany) have large holdings of bonds from the periphery (Ireland, Portugal, Spain, Italy and Greece). Some are suggesting an additional round of stress tests for major banks on the Continent. With borrowing difficult for governments, more austerity—and possibly social unrest—are certain to come. Credit will be tight, due to the banking industry’s difficult situation with sovereign debt.

Europe could possibly lapse into recession, especially if one of the weak countries cannot refinance existing notes as they come due. On the positive side, though, the global economy is making progress, which will help both European exports and attitudes. A recession is not certain by any means—I’d still put the odds no higher than 20 percent.

Unfortunately, the American economy is stuck in low gear. Losing Europe to a double dip would stress our own economy, probably to the recession point itself. This is a significant risk, and one that bears some contingency planning by banks and businesses and families in the United States.