Portland Public School bond issue will give Portland the highest property taxes in the state
by Eric Fruits, Economist
EconInternational

In my life as an economist, I have never seen the word “historical” attached to a bond issue. But “historical” is the word local media has attached to Portland Public Schools “school modernization” bond issue. And with good reason: The $548 million in bonds (plus interest) will be the largest bond issue in Oregon’s state history. 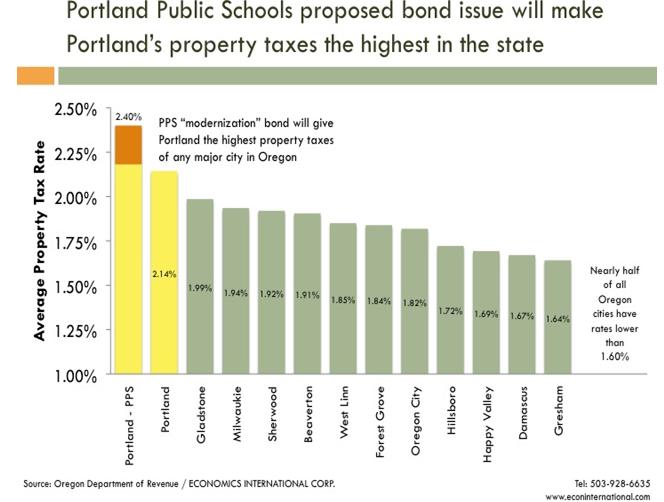 It seems school board has recruited the Oregonian to promote the bond issue. An article in Saturday’s paper ordered readers to “Do the math.” The article carved out a small slice of property owners’ tax bills and proclaimed that Portland’s property taxes are really pretty small and this “historic” bond measure won’t increase property taxes that much. (It’s a bit like telling someone knee deep in credit card debt that because they don’t own a car, they can afford a new car payment.)

Today, Portland residents who live in the PPS taxing area pay the 10th highest taxes of any city in Oregon.

The figure above shows that, if the bond measure passes, the parts of Portland in PPS will have just about the highest taxes in the state of Oregon (exceeded only by the cities of Spray and Heppner, two cities with combined population of less than 1,700).

PPS has a plan to get this “historic” bond issue passed. It has been revealed that the school board may put an operating levy on the ballot at the same time. School board member Bobbie Regan reports:

I want to be sure you know that we are looking at the possibility of going out for the local option in the spring also. We haven’t yet had a thorough discussion about this but all board members are keenly aware of the budget situation we face and it could make sense to look at renewing our operating levy at the same time as we begin to address our facilities needs.