The Recession Was Over! (June of Last Year)
By Bill Conerly,
Conerly Consulting, Businomics

That nasty old recession is finally over. Turned out it was over June 2009. But now we know it officially. The arbiter of business cycles is a committee at the non-governmental National Bureau of Economic Research, which announced the decision today.

Their key statement was:

The committee decided that any future downturn of the economy would be a new recession and not a continuation of the recession that began in December 2007. The basis for this decision was the length and strength of the recovery to date.

So, they are not saying that things are great now, or that the outlook is rosy. Simply that if things turn down now, it’s a new recession rather than a continuation of the old recession.

For the record, I explained the background on the NBER approach in an older post about the beginning of the recession.

The committee looks at a number of indicators, including the classic four coincident indicators: 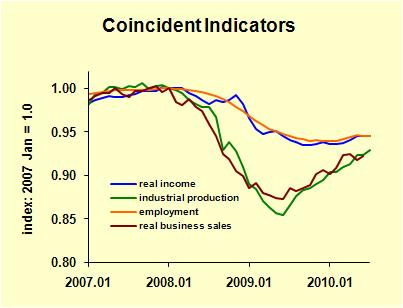