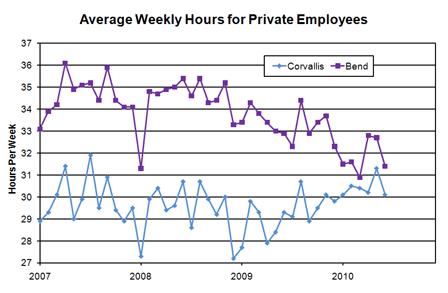 Oregon average weekly hours data indicate that in some respects businesses are poised for economic recovery. For the state as a whole, the average workweek for manufacturing production workers is back to normal. In June, this average was 39.2 hours per week, which was close to the levels seen in 2001 through 2004, but down somewhat from the frantic pace during the credit-induced boom of 2005 through 2007. Seeing hours above 39 is a welcome sign following the dizzying downturn of the recession when manufacturing production workers averaged fewer than 36 work hours per week.

Looking at private-sector all-employee hours data for Oregon’s metro areas provides insight into economic conditions across much of the state. The Bend MSA continues to drop, with 31.4 hours in June. In contrast, this central Oregon metro area, home to a diverse group from skiers to ranchers, previously saw much higher average weekly hours at close to 35 hours per week in the summers of 2007 and 2008.

The contrast is seen in the Corvallis MSA, where large employers include Oregon State University and Hewlett-Packard. This area’s hours averaged 30.1 per week in June – a continuation of an uptrend over the past 12 months. In June 2009, hours worked averaged 29.3. Note that the Corvallis figures, as is true for all the numbers in this article, only include the private sector, and thus don’t directly reflect hours worked by OSU employees.

Eugene, Medford, and Salem metro areas all show similar trends in the average workweek over the past few years, with substantial drops by early 2009 followed by a return to near normal by June 2010. Portland’s trend is somewhat different in that its average workweek only dropped by about an hour per week by 2009, and at 34.1 hours in June 2010 hasn’t quite returned to normal.

With the average workweek back near normal in most industries and in most metro areas of the state, businesses are ready to start hiring in earnest if demand for their goods and services increases. They will be compelled to hire substantial numbers of workers if and when the economy expands at least modestly.