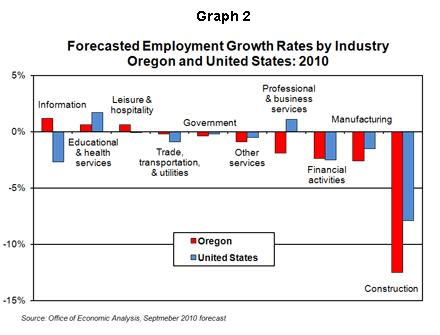 The national economic slowdown has impacted Oregon. While the recovery plods on, it is turning out to be one of the slowest on record according to the latest quarterly forecast (September 2010) from the state Office of Economic Analysis (OEA). The second quarter marked the second consecutive quarter of job growth in the state, but at an anemic pace of just 0.5 percent – or less, if one discounts the temporary hiring of Census workers last spring.

Two drivers of economic activity in the first half of this year – stimulus spending and inventory replenishment – have nearly run their courses with no clear or sustained source of growth replacing them. However, the chance of a double-dip recession, while greater than just a few months ago, remains low.

Oregon’s short-term outlook reflects growing uncertainty over the pace of the recovery. OEA has downwardly revised their forecast from the last report published in May. They now expect job losses in the third quarter, whereas before they anticipated small gains. Layoffs in the public sector (Census-related, and in state and local governments) are expected to more than offset gains in the private sector. Growth will resume in the fourth quarter, but at a lackluster pace.

Overall, 2010 will end down 1.2 percent (18,700 jobs) over 2009; a year during which the Oregon economy slashed more than 100,000 jobs. Construction will suffer the sharpest decline (-12.5%) with losses extending into 2011 as recovery in the residential and commercial markets will be hampered by the overall tepid economy. Financial activities (‑2.4%) will be pulled down by weakness in real estate, and by the fact that many institutions are still holding potentially problematic assets. Manufacturing will decline along with the nation, although at a faster pace.

Trade, transportation, and utilities will be essentially flat, with growth resuming in 2011. Information, educational and health services, and leisure and hospitality will eke out small gains.

From start to finish, OEA calculates that Oregon will lose 148,200 jobs over seven quarters during this recession; a decline of 8.5 percent. OEA anticipates it will take over four years from now – until the fourth quarter of 2014 – for employment to return to the pre-recession peak reached in the first quarter of 2008.