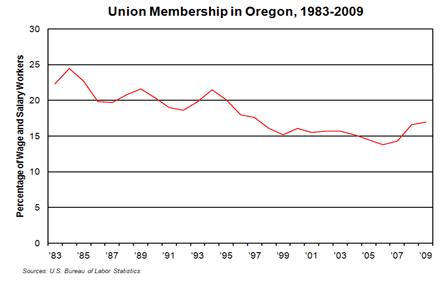 The small increase is calculated from data collected in a survey and may not be statistically significant. However, this marks the third consecutive year that the share of all workers who are union members has risen in Oregon. Since 1983, the first year for which comparable union data are available, the overall trend has been downward with brief upward ticks along the way, from a high point of 24.5 percent in 1984 to a low of 13.8 percent in 2006, just before the current 3-year rise (Graph 1).

Union membership rates are much higher in the public sector than in the private sector. In 2009 in Oregon, more public-sector employees (152,000) belonged to a union than private-sector employees (120,000), despite there being almost five times more wage and salary workers in the private sector. Union members comprised only 8.9 percent of all private-sector workers but 57.7 percent of public-sector workers and 17.0 percent of both combined. For the nation, comparable figures were 7.2 percent, 37.4 percent, and 12.3 percent, respectively.