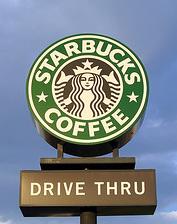 In July, Starbucks announced record earnings during the third quarter as U.S. sales rose 9%. The Seattle Coffee Giant participated in new marketing strategies to spur the record comeback that reduce the elitist view of $4 coffee drinks and offer cheaper alternatives to broaden the market outside Starbucks stores.

“There’s no question that improving customer service, quality of beverage and speed of service has had a big impact on revenues,” CFO Troy Alstead said in an interview with the Wall Street Journal.

Burt Helm of Bloomberg reported that the corporation’s fiscal-third-quarter earnings rose 37% based on increased sales. Starbucks also reported earning $207.9 million as compared with $151.5 million a year earlier. In addition, revenue increased from $2.4 billion to $2.61 billion.

Some new marketing strategies include:

2.  In an effort to dissolve Starbucks’ elitist image, it now offers lower-priced items in fast-food restaurants and vending machines.

3.  The “However-You-Want-It Frappuccino” extended the product to accommodate individuals who do not drink caffeine or dairy milk. This extension increased sales and represented two percentage points of the chain’s 9% growth.

4. Starbucks created Via Instant Coffee so it could sell its product in grocery stores to increase growth by expanding its market outside of Starbucks stores. The corporation also expanded the Via product to more locations in the U.S., U.K. and Japan. So far, this effort has proven successful as Via sales have already exceeded the company’s annual target for Japan.

Starbucks’ new marketing strategies have proven very successful and the corporation is hopeful that its growth will continue into the fourth quarter.