I think the Federal Reserve has unknowingly slowed the rate of economic growth.  We are not in a second dip, but we are hardly expanding at all.  Recent data have been lackluster, though not dreadful.  Employment excluding Census workers, car sales, the ISM survey, consumer confidence, all show flat results. 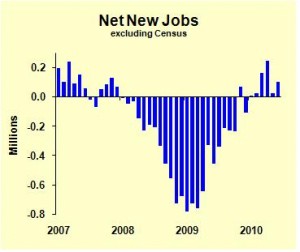 Take a look at the money supply.  The monetary base (the raw material out of which money is made) rose very sharply in late 2008.  The money supply rose at a fast pace, but not nearly as fast as the typical relationship would show.  That was fine, because there was enough money supply growth to get the economy growing again late in 2009 and early 2010.  However, the economy has slowed down to about zero, which I believe is due to the Fed dialing down money supply growth.  Over the past 12 months, the money supply has grown by about the rate of inflation, leaving no further growth for real expansion of the economy. 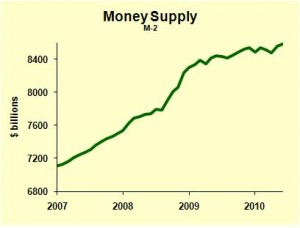 The Fed had gotten used to thinking of monetary policy as working through interest rates.  When the Fed Funds rate drops near zero, one view says they are out of ammunition.  However, Milton Friedman would have said “No.  Just add more money to the economy and you’ll get stimulus in the short run.”  This is called quantitative easing.  It is was the Fed was doing—but they did not acknowledge they were doing that.  Their large purchases of mortgage-backed securities were, in the Fed’s view, simply stabilizing that particular market.  (Tim Duy has a good explanation of the Fed’s mindset.)

The Fed’s balance sheet shows relatively weak growth lately, as I mentioned in my recent post The Fed’s New Policy: Quantitative Tightening? They are simply choking off the economy.