From June to September 2009, firms in Oregon that were newly opening or expanding added about 86,170 jobs. During the same time, firms that were cutting jobs or closing altogether shed about 93,230 jobs. The result was a net loss of 7,060 jobs over the quarter. 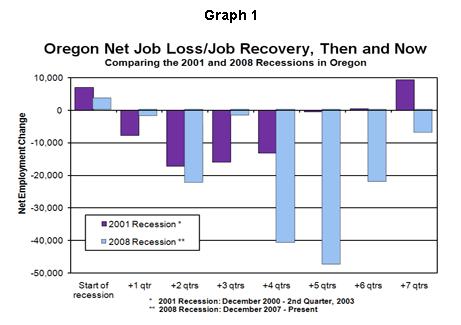 Although this marked the seventh consecutive quarter with a net job loss, the loss was significantly smaller than the loss posted at the end of each of the previous three quarters. For instance, in the second quarter of 2009, the total job gain was similar to the third quarter, but the total loss exceeded 108,600 jobs. Thus the net change in the second quarter was a loss of about 22,000 jobs – more than three times the loss seen in the third quarter.

The previous recession had five quarters with net job losses. The total net loss was about 54,800 jobs, and the worst net loss in any quarter was a drop of 17,200 jobs. Within 18 months of the start of that recession, employment in Oregon resumed net growth.

As mentioned previously, the more recent recession shows net job losses in at least seven quarters. The losses might continue into an eighth or ninth quarter, but data beyond the third quarter of 2009 is not yet available. Thus far, the net drop in employment is about 143,200. The worst loss was a net drop of 47,400 jobs, which occurred in the first quarter of 2009.

In spite of the length and depth of the recent recession, the third quarter 2009 data suggests a moderation in net job loss in Oregon’s private sector. Data from subsequent quarters will likely show continued moderation, or possibly even net growth.