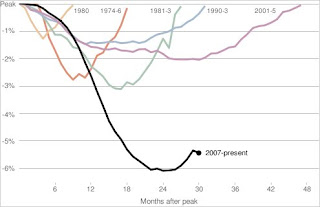 My little, but highly scientific, poll closed last night and 80% of you indicated that you favor more stimulus over austerity.  There has been a lot of debate in policy circles lately about what the appropriate policy should be right now, but it appears that the more stimulus side has the weight of evidence on their side at the moment.

This was highlighted today as the new US jobs report came out for June and it is dismal. Only 83,000 private sector jobs created isn’t even enough to keep up with natural labor force growth let alone make any headway toward recovery.  The graph, taken from the New York Times’ Economix Blog, shows the magnitude of this recession compared to other recent ones.

State budgets are also in tatters and a huge number of layoffs are looming unless the states receive some immediate help.  Home sales and home construction are tanking, consumer spending and confidence are waning.  I don’t think we will do a double dip, for we haven’t risen at all.

On the flip side of the coin, US debt is still very cheap, meaning markets have not yet begun to worry about the US deficit – something Krugman has been harping on for some time.  So his question is why should we worry if markets aren’t.  Critics suggest that we need to take a longer view and markets will start to punish us if we wont soon show restraint.

The counter-argument that we are on an unsustainable debt path does not make sense to me – we are talking short-term here. Yes, the long term fiscal picture demands that actions be taken, but not in the depths of a recession.  The other argument that government stimulus is hard to do and wasteful has some merit in my opinion, but right now, the simplest thing to do, and the most effective, is to give block grants to the states.  That is easy, immediate and effective.

Some good federal news on that front is the effort to give $10 billion to the states for education, but that is now mired in a debate about reducing Race to the Top funds.  I think the Obama administration is wrong in their threat to veto the bill if such a reduction is included.  Just as stimulus spending is an extraordinary measure for extraordinary times, so too should they view their efforts are education reform.  The first-order problem is funding, worry about reform next year.  Ironic to note that this $10 billion of all of America’s public schools is in a $80 billion war spending bill.  Another lesson in opportunity cost.