This is my third (and maybe final) post in the series on the economic effects of our budget deficit and debt.  First I talked about the risk of inflation due to the deficit, then about the potential of a debt crisis in America.  In this blog I’ll explain how I expect our problem to be resolved: higher taxes, leading to slower economic growth.

Here’s the big picture of the annual deficit, based on the administration’s current projections: 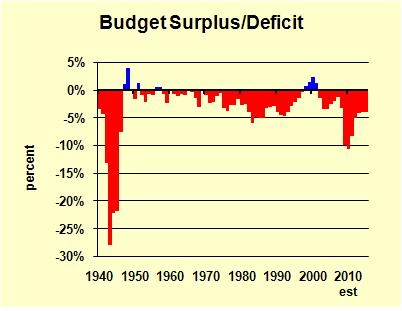 Notice that we had a large deficit during World War II, but we then ran a surplus.  The Obama administration is not anticipating a surplus any time soon, and for good reason.  Most of the World War II spending was temporary.  When the war was over, we stopped buying tanks and warships, and we stopped paying most of the soldiers, sailors and marines.  That cut in spending combined with a healthy economy to produce the surplus.

It’s hard to anticipate a major cut in spending any time soon. The official budget projections do forecast that the immediate stimulus efforts wind down, but the big budget drivers–social security and Medicare–keep growing.

The result of the continued deficits is that the federal debt continues to grow: 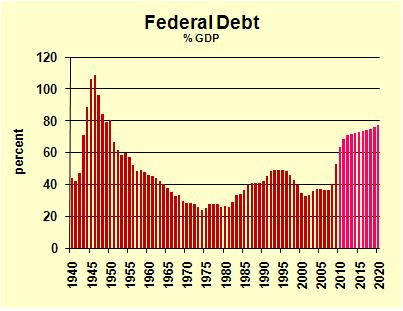 Carmen Reinhart and Kenneth Rogoff have studied financial crises around the world, and they find that when debt/GDP ratios get to 90 percent, then “median growth rates fall one percent, and average growth falls considerably more.”  With our projected debt/GDP ratio getting close to 90 percent, we may well anticipate slower growth.  To put that one percentage point slower growth in perspective, our economy normally grows by about three percent a year.  With one percent population growth, our per capita output rises by about two percent per year.  After 21 years, per capita output has risen 50 percent.  But if growth slows to a mere one percent per capita, then in 21 years our output rises only 23 percent, less than half the normal growth.

Congress and the White House may decide to trim some spending, but most of the expenditures are for entitlements.  That’s harder to cut than defense spending or pork barrel projects–and Lord knows they are hard to cut.  Here’s a rough sketch of the 2015 planned expenditures:

I believe that Congress won’t “take away” money from recipients who are used to receiving it.  So taxes must rise to avoid a debt crisis.

A VAT–value added tax–is being discussed in some corners.  (For more details, see Wikipedia’s VAT article.)  I think the political roadblocks to a VAT are high:  conservatives are afraid that it will be a money machine for government, while liberals worry about the VAT’s impact on lower income families.

If the VAT is unlikely, then personal income taxes are going to have to increase.  Income taxes have a disincentive effect on work and investment.  Arthur Laffer’s famous cocktail napkin captured the idea that tax rates could be so high that tax revenues declined.  The fringe view is that back in the 1970s we were at the point where a tax cut would pay for itself.  It is absolutely mainstream economics that any tax has a disincentive effect, and that higher income taxes will stifle labor and investment.

Greg Mankiw sketched out some back of the envelope estimates of how the last century’s tax cuts stimulated growth of taxable income.  There’s no doubt that the higher tax rates we’ll be seeing will slow down income growth.

Consider the dark days when the highest marginal tax rate (the tax on an additional dollar of income) was 91 percent.  Suppose that a husband’s earnings put a couple right at the threshold of that 91 percent tax bracket.  Should the wife go to work?  She would keep only 9 cents of every dollar she earned, minus Social Security and state taxes, commuting costs, child care, business clothes, etc.  Here’s an interesting chart of the highest marginal tax rate compared to the percentage of the population working. (Data: employment-population ratio from BLS, tax rates from TruthAndPolitics.) 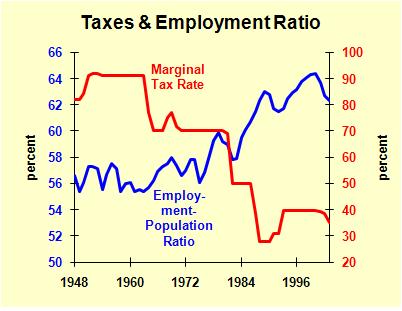 The percentage of the (working age) population that is employed varies with the business cycle, but it also had a strong secular rise about the time that marginal tax rates fell.  Social trends had a great deal to do with the rise, as women became better educated, more ambitious, and less discriminated against.  However, the change in tax rates also played a role.

It’s possible to raise tax rates without pushing up marginal tax rates (much).  Imagine that every taxpayer paid an extra $1000 of taxes, plus whatever the tax return indicates.  Such a change would have no impact on the marginal tax rate.  However, politics argues for just the opposite: that tax rates will be increased at the margin, further discouraging work effort.

The bottom line is that we should expect weaker economic growth in the coming decade or two.  The United States will look more like Europe, where people work fewer hours and take longer vacations.  We just won’t be able to afford luxurious vacations.  Look for those campgrounds to fill up early! We will also spend more effort gaming the tax code, looking for tax shelters, and dreaming up creative ways to avoid taxes.

Although our economic growth will slow, I don’t see the higher tax rates as triggering a recession or depression.  I can tell you the cause of every post-World War II recession, and none of them were triggered by tax hikes.  However, I can say with confidence that higher income tax rates will slow the economy, and we’ll end up with less growth than we otherwise would have had.