The economy is on the mend.  We have a long way to go before employment is back to normal, but the evidence shows progress.  The production-based indicators, such as gross domestic product and industrial production have clearly bounced back. 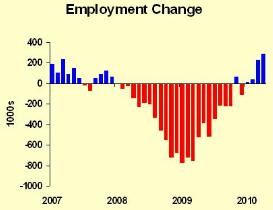 We’re probably just one quarter away from reaching our old peak level of real GDP.  The employment-based indicators have been slower to rebound, but now show gains.  Total non-farm employment (the standard measure) has grown in each of the last four months, with strong gains the last two months.  Although Census workers inflated the increases, even without them the gains are substantial.

Manufacturing, an important bellwether, has added workers in the last four months.  Temporary help agency employment has also expanded, which is often a leading indicator for the entire economy.