Five encouraging signs for Oregon in the past 10 days.
By Oregon Small Business Association

(1) Jobs: The Oregon Employment Department reported this week that the state unemployment rate fell form 11% to 10.5%.  Economist are talking about Oregon passing the turning point in the economy.

(2) Metro Recovery: The Portland Metro Business Index rose 1.8% with great news on housing.   The chart below shows an encouraging upswing from a terrible trek of negative downturns.

(3) Environment: This month Portland was credited as the highest ranking Green City in the nation according to the Green City Index (read article).

(4) Roads: Also this month, it was reported that Oregon highways are in the 10 best in the nation as listed by Reader’s Digest April edition.

(5) Film: The local film industry is teeming with news that local Portland director Gus Van Sant may be tapped for the 4th Twilight movie (read here) which, if filmed again in Oregon, could bring millions in film production revenue to the local economy. 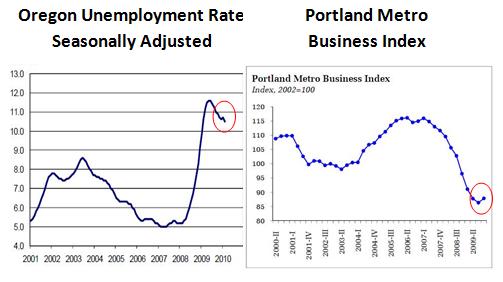 Labor market trends continue to be generally weak. Initial unemployment claims continued to decline, although the pace of improvement slowed compared to the previous quarter and the level of claims remains elevated and consistent with a decline in overall jobs, as evidenced by the ongoing drop in nonfarm payrolls.

Residential building activity also experienced a boost at the end of 2009 as permits rose to their highest level since the first quarter of 2008, but, like home sales, permits stand well below the peak levels of 2005.

The increase in the PMBI is a welcome development after the ten quarters of consecutive decline that began in 2007.  The improvement is consistent with firming economic activity on both state and national levels as the recession drew to a close in the middle of 2009.