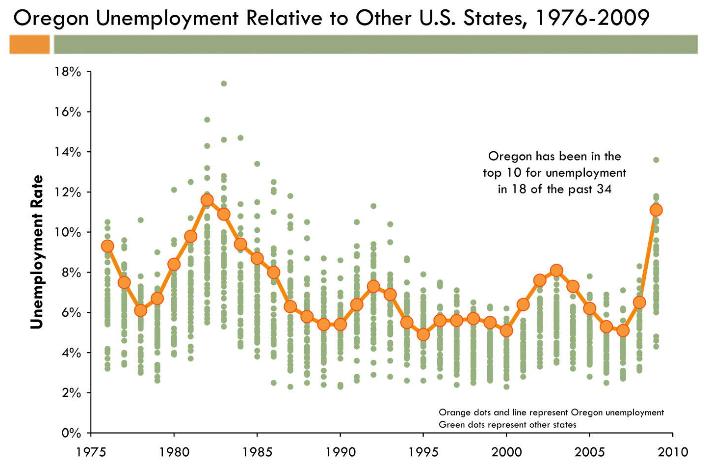 Oregon’s chronic high employment has been a source of bafflement for many observers and economists.

Businesses note that Oregon has an anti-business attitude that treats business a problem to be dealt with rather than an endeavor to foster.  In contrast, others point to surveys that rank Oregon as having one the lowest business tax burdens in the country [1, 2] or being one of the most “business friendly” states in the country. In the face of these studies, Oregon’s persistent high employment rate suggests (1) Oregon is not employment friendly, and/or (2) the various tax burden and business friendly are fundamentally flawed and, therefore, meaningless.

Since so many Oregonian’s do not like to discuss the state’s business environment, observers have tried other explanations for Oregon’s moribund jobs environment, including:

Education.  If Oregon just spent more money on education, employment in the state would improve.

Climate. Analysts at the Oregon Employment Department have a theory that states with milder climates have higher unemployment rates and (believe it or not) Oregon is considered to have a relatively mild climate.

High minimum wage.  Although minimum wage workers (and potential works) make up a relatively small portion of the workforce, Oregon’s unemployment rate among those most likely to earn minimum wage is substantially higher than if Oregon’s minimum wage was the same as the Federal rate.
Ultimately, many observers, reporters, and politicians throw up their hands and blame manufacturing.  The story goes like this …

Oregon relies heavily on heavy manufacturing. Heavy manufacturing is highly cyclical: Employment soars during boom times plummets during down times.  Thus, during recessions Oregon’s employment suffers worse than the rest of the country.  The story falls apart for several reasons:

Other states that rely more heavily on heavy manufacturing do not have persistently high unemployment.  According to the Oregon Employment Department, Wisconsin, Iowa, and New Hampshire have a greater share of their employment in heavy manufacturing, yet these state have much lower unemployment than Oregon.  In fact the Oregon Employment Department produced the following graph that concludes that “there seem to be other factors that have a stronger correlation to the unemployment rate than the concentration of durable goods employment.” 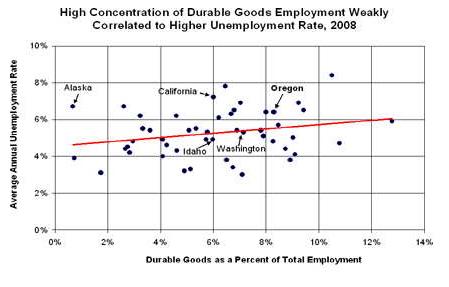