The report on retail sales shows that consumers are loosening their purse strings, continuing a trend that is now about a year old, though with plenty of backsliding along the way. 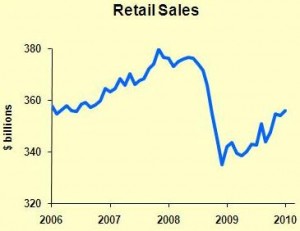 Some of the increase in January may reflect higher prices for food, but we also saw gains in pure discretionary categories, such as electronics and sporting goods.  This is not a return to the old days of bling and extravagance.  Consumers continue to increase their savings rate and pay down debt, but they can do both of those things while gently raising their spending.

How does that work?  Imagine disposable incomes rise by 4%, but spending increases by 3.5 percent.  The savings rate is up (which the government calculates as disposable income not spent divided by disposable income).  Consumers can pay down some of their debt with their savings.  And they can also increase their current spending.  This point has been lost on many folks, who think that either consumers come back, or they increase their savings, but not both.  Well, it can be both, if the increases are relatively mild.  That’s where we are today, and I expect pretty much the same throughout the course of 2010.