Annual Sessions for Oregon Legislature
“Would you vote yes to approve or no to oppose annual sessions for the state legislature?” 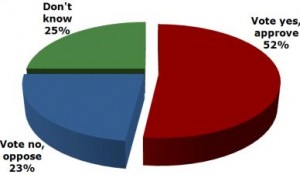 Our recent poll shows Oregon voters support annual sessions for the state legislature by more than a two-to-one margin. Today, 52% of voters statewide tell us they would vote “yes” to support a ballot measure that would change Oregon’s legislative schedule to annual sessions. Just 23% would vote “no” and the remaining 25% are undecided.

There are notable differences of opinion by subgroup, primarily by geography and partisanship. For example, in Multnomah County, annual sessions are favored more than three-to-one (60% to 18%). Voters in the Willamette Valley are in favor by a smaller, two-to-one margin (52% to 26%), but there is only plurality support in Clackamas and Washington Counties (46% yes, 25% no) and the Southern/Coastal/Eastern regions (50% yes, 23% no). By party, Republicans and Independents are far less enthused than Democrats on this issue.