An interested reader asks, “One question I would like to ask is whether you see the US ever fully recovering from this recession?”

Good question.  In the common sense of the term, yes we’ll fully recover.  The level of economic activity will fully recover all lost ground, and then hit new record highs.  No problem.  Let’s take a look at the long-run history: 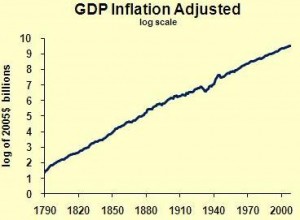 (Data note: the chart shows the logarithm of real GDP.  For those of you who don’t usually live with logs, the key point is that the slope of the shows the percentage growth rate.  Roughly speaking, long-term growth has been fairly steady, but if you look at the chart long enough, you’ll see a bit of concavity with respect to the lower-right corner, meaning that our growth rate has slowed just a touch in the latest half-century.)

The only downturn that stands out on the chart is the Great Depression, and look how above-normal growth after the recession brought the economy back up to the trend line.

Some academic research has confirmed this rough eyeball analysis, but other studies find that there is a permanent loss of “potential output,” which is the level of production you have when the economy reaches full employment.  Reasons for a permanent loss include lower capital investment that is not fully made up later.  Some folks may leave the labor force early, so “full employment” after the recession may imply fewer people working than before the recession.

Another important thread is the composition of output in both the boom and the bust.  The measured GDP in the years of the housing boom included residential construction spending, valued at then-current prices.  But we now know that we overbuilt, meaning that the new housing we built was not really worth the price at the time.  So in one sense, we didn’t really produce as much as the statistics say we did.  However, we did invest in the ability to produce that stuff.  Contractors bought backhoes, nail guns and pickup trucks.  Some of that physical capital may find work to do, but some of it will never be fully employed.  (Some nail guns may rust out before they are put back to work.)  This means that some of the capital spending we did back in the boom does not really add to today’s productive capacity.  Oh sure, it could add to productive capacity if we wanted more houses, but we don’t.  It’s like spending money on a state-of-the-art buggy whip factory.  How much does that help the economy produce goods and services?

So there will be some permanent effects of the recession, but I think they’ll be relatively small.  In short, Yes, we will (pretty much) fully recover from the recession.