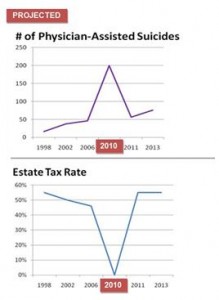 In insurance it’s called a “moral hazard”. A moral hazard is the result of maximizing behavior. A person weighs the costs and benefits of an action and when benefits exceed costs, he takes the action. For example, if an accident costs the person $1000, but pays $2000, the person not only has no incentive to avoid the accident but may have an incentive to seek it out.

What has this got to do with assisted suicide? There could be “millions” in estate tax reasons why they relate. Estate taxes have long been referred to as the “death tax”, but 2010 may shine a whole new meaning on that term. Presently the estate tax is 45%. The estate tax will drop to 0% for just one year, 2010, and then return to the pre-Bush administration rate of 55% in 2011.

Opponents to the physician-assisted suicide laws have long felt there is a moral hazard to granting a person the right to chose when to die. Will the person make that choice merely because of their personal suffering, or are they going to feel obligated to do so to relieve their children of the need to care for them or because they are a financial burden. Add to the mix the possibility that by dying in 2010 they could become a financial “windfall” for their heirs and the risk of a “moral” hazard to the law rises.

If a person’s estate is deemed to be worth $3.5 million or more and they died before the end of 2009, their heirs would receive only about ½ of the value of that million dollar estate. The other half will be retained by the government. For example, if an estate has a value of $3.5 million, taxed at 45% in 2009, that leaves about $2 million for the heirs. In 2011, they will be taxed 55% leaving only about $1.6 million of the $3.5 million. But, if they should die in 2010, their heirs would have no estate tax and have access to the entire $3.5 million. (In 2011 the amount exempted from estate tax drops from $3.5 to $1 million, which will also affect a greater number of inheritances).

The Estate Tax has been seen as regressive, that is, affecting the families who have the least to lose. Those with multi-million dollar estates have the means to seek out advice to protect their estate from taxation. It is the small business owner, farmer, or parents who hope to pass along the value of home or assets saved over the years who find approximately half of the value of that estate is lost to the Estate Tax.

Some argue an estate tax should be done away with altogether. Some feel it should be reduced to 35% with the first $5 million exempted. This version has bipartisan support but may not reach the 60 votes necessary to pass the Senate. Plus, the Senate is presently tied up with health care legislation and other bills that have taken priority over the estate tax.

Presently, Oregon and Washington are the only states which allows physician assisted suicide–allowing a person to choose to die with medically prescribed drugs. In Oregon it is called the Death with Dignity Act and the choice is to be made only by persons “diagnosed with a terminal illness that will lead to death within six months.” There has been controversy in the application of the law.

A few years down the road, when folks take a look at both the estate tax and suicide rates it will make for an interesting study. Did the estate tax drop in 2010? Did the suicide rates peak? In statistics that is called an inverse correlation. In insurance it could be called a moral hazard.

Either way, as one elderly gentleman put it, with sardonic humor, “In 2010 I’m not going to linger too long at the top of any stairways”.

Kay Helbling was an insurance adjuster and executive for 15 years, a small business owner, and a teacher for ten.  But, her most fulfilling work has been as a mother of her two boys. She is now enjoying an empty nest with her best friend—her husband.