Some say that we have added no jobs in the past 10 years, and they are calling it a “lost decade.”  What they see is a product of bad data analysis.  Here’s the actual U.S. employment data, plotted in blue: 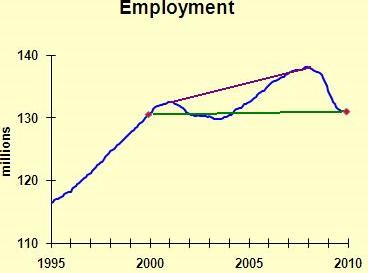 Actual data in blue.  The green line goes from December 1999 through December 2009, showing virtually no growth in a decade.  But it’s always to calculate changes from a peak to a trough if you want to understand long term trends.  The economy’s ability to generate jobs over a long period of time is better examined by looking at peak-to-peak growth, which is the purple line.

Going forward, businesses should recognize the slower growth of the working age population that we’ll have in the 2010s.  Plenty of companies are planning on expansion, but won’t find the workers easily, unless they start thinking about this challenge ahead of time.  (A year before the recession, I wrote about 6 Steps to Hiring in a Tight Labor Market.  It’s useful to read even before the market tightens.)