As Oregonians mull their ballots for Measures 66 and 67, proponents remind them of the Doonesbury year.  The year was 2003 and Oregonians overwhelmingly rejected an increase in income taxes to fund what legislators call “vital services,” namely K–12 education. That year and the next, many Oregon schools cut spending. The result was a temporary increase in class sizes in some schools.  The Doonesbury comic strip picked up on the theme and ran a week-long series highlighting Oregon’s situation. 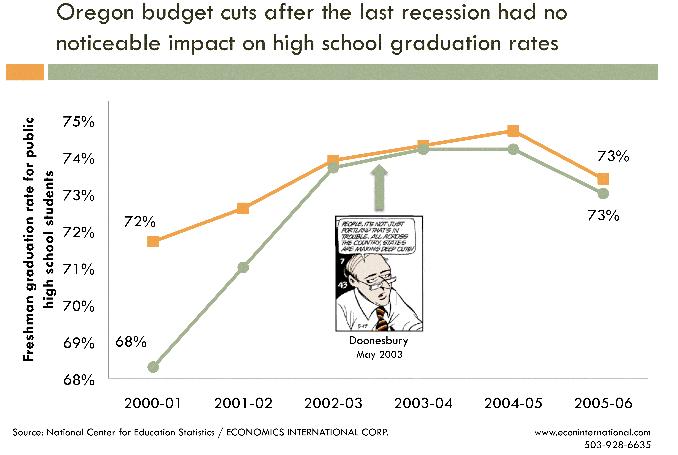 Tax proponents were insulted, fearing that Oregon had become a “laughing stock.”  Other’s were more sanguine.  One school obtained a signed copy of one of the strips and auctioned it at a school fund raiser.  When life gives you lemons, make lemonade.

Fast forward to today and the fear of Doonesbury returns.  One economist/blogger opines:

When your taxes and public services are among the lowest in the country, the benefits from improving poor public services—especially education—are likely to outweigh the costs of modest increases in taxes.

Missing from the discussion is the most important question of all: Do temporary cuts in public education spending affect outcomes?

Information from the U.S. Department of Education says no.  As the figure above shows, Oregon graduation rates were no different from U.S. graduation rates—even during the Doonesbury years.

That makes sense.  Education outcomes are developed over years. Temporary spending cuts have the same impact as having a bad teacher for a year or two.  It’s painful at the time, but has no noticeable long-run impact.