Everyone knows that we have this huge fiscal stimulus.  I went looking for it.  I didn’t look everywhere, though.  We’ve had some tax cuts and increases in transfer payments.  The raw data on these subjects reflect not only policy, but the circumstances of citizens.  Taxable income goes down in a recession, and unemployment goes up, so tax revenue and transfer payments adjust automatically.

We can look at federal expenditures, which include garden variety government plus public works spending.  Here’s the data, expressed as seasonally adjusted percent changes at annual rates: 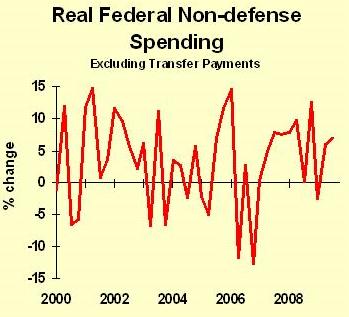 Sorry, but I don’t see the stimulus as large.  The last two quarterly figures were 6.1 percent and 6.9 percent, which are certainly larger than long-run GDP growth, so I’d call that stimulus.  However, I had expected to see a large surge.  Perhaps this reflects that the Obama stimulus is phased in, with more coming.  Or perhaps the stimulus just isn’t as big as the headlines make it out to be.

(I also don’t understand why the path of government spending is so jerky.  Does it really jump around that much, or is that a relic of archaic data collection procedures?  If you know the answer, please say so in the comments.)